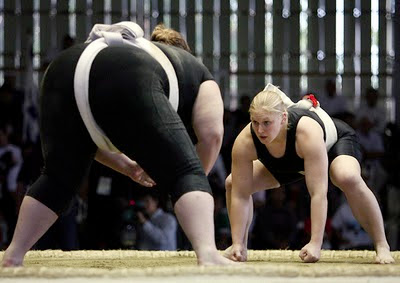 OK so this pic is not boys wrestling girls but how often do you see women sumo wrestling? I’m getting over the flu and wasting time reading John Piper’s blog. In reference to Joel Northrup’s refusal to wrestle Cassy Herkelman (a girl) in the Iowa state wrestling tournament. I agree with John Piper’s stance but certainly not the severity. Its not worth sacrificing my life – sorry John Piper. I would die on behalf of the gospel but boys wrestling girls is in no ways central to the completed work of Christ.

"Get real, dads. You know exactly what almost every healthy boy is thinking. If a jock from Northern Minnesota encircles her around the breasts and twists his leg around her thighs, trust me, he will dream about that tonight. Only in his dream she won’t have clothes on. And if he doesn’t dream it, half the boys in the crowd will. Wake up dads. You know this."

Two questions for you John Piper:

1) Did you see the picture of the girl he was going to wrestle? Cassy Herkelman

2) Would you dream about her John Piper? I might have nightmares about her