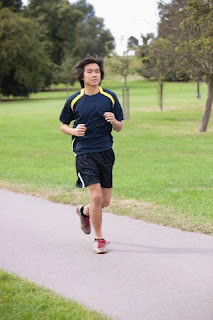 My brother got me David Epstein's book The Sports Gene. It is a fascinating quick read. If you're interested in sports and science, it will enthrall you. I finished it in three days.

Epstein's point is that far more of an athlete's performance is due to genetics than due to the so-called "10,000 hour" rule promulgated by books such as Outliers by Malcolm Gladwell and Talent is Overrated by Geoff Colvin (both which are very good). The 10,000 hour rule states that any person can reach expert level of performance in a sport if they devote 10,000 hours of deliberate and intentional practice.

Someone who devotes 10,000 hours of sport-specific practice is likely genetically gifted for the sport in extraordinary ways AND genetically gifted in their ability to persevere and benefit from practice. Therefore, a person who can practice that much is an outlier in several significant ways (Gladwell, however, in a recent New Yorker piece, makes a strong case for allowing doping in certain sports).

One significant way elite athletes are genetically gifted is body type. There are certain body types that provide tremendous advantage over others. An obvious one is height. Epstein states 17% of American men between the ages of twenty to forty who stand seven feet tall are in the NBA right now.

A less obvious one is leg length. This is not the same thing as height. Epstein writes:

For any given sitting height - that is the height of one's head when one is sitting in a chair - Africans or African-Americans have longer legs than Europeans. For a sitting height of two feet, an African American boy will tend to have legs that are 2.4 inches longer than a European boy's. Legs make up a greater proportion of the body in an individual of recent African origin. And this holds for elite athletes.

Kevin Norton and Timothy Olds, two anthropometric scientists, conclude that this may partly explain why east Africans excel in endurance running events whereas short-limbed east Europeans and Asians dominate sports such as weight-lifting and gymnastics. We Asians are slower, not just because we're short (which does make a difference in basketball) but also because our legs are shorter proportionally than other races.

Again, this is not about height. There are many Kenyan distance runners who are short. Being short is an advantage for distance running because smaller people have a larger skin surface area relative to their body volume. As this ratio of skin surface area to body volume increases, so does the body's ability to cool itself. Epstein cites the example of 5'8" Paula Radcliffe who collapsed in the 95-degree heat of the Athens 2004 marathon. The winner was 4'11".

Leg length makes for faster and more efficient running, at any distance. Elite Kenyan runners are small guys who have short torsos, a narrow pelvis, and are mostly legs. As Christopher McDougall might put it, they are born to run.

Some of you may be thinking, "But I know some Asians with long legs!" and "What about Jeremy Lin? He's fast". The study of body measurement and race is not about statistical anomalies, it's about averages. Just because you know someone who doesn't fit the average does not negate the overall trend.

If you're Asian, it doesn't mean you should stop running. Far from it. You should run as fast as your body type allows and never use it as an excuse for mediocrity. It's just another obstacle to overcome.

In addition, there is hope. Epstein writes that from 1957 to 1977, the average height of a Japanese man increased by 1.7 inches. By 1980,  the height of Japanese people in Japan caught up to the height of Japanese people in the U.S. The entire height increase was due to an increase in leg length. I wonder if perhaps the extensive starvation history of Asians led to shorter legs. So keep eating and keep running and who knows what will happen. And if you're not an elite distance runner today, maybe your kids someday might be.

UPDATE: The winner of the 2004 Athens women's marathon was Japanese national Mizuki Noguchi. For the diversity of Olympic body types, check this out - particularly the 2nd pic with Tegla, who at 4'11" has legs as long as Deena, 5'4".