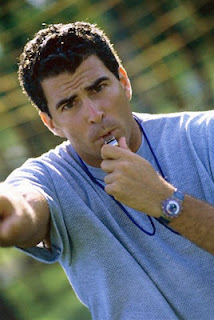 In most things, I love being coached. It wasn't always that way. In high school, I had some poor coaches. After playing a mediocre game, my water polo coach would yell, throw chairs, and curse at my teammates and me. Playing for him felt like living in a pressure cooker that might blow up any second.
I have my own issues too. I often resent being told what to do. Most of all, its tough to hear that you're not doing something right. Its painful and annoying to have someone get in your face and tell you that your performance was sub-par.
Two years ago, my brother-in-law taught me how to throw a football. He's a good teacher and a former athletic coach. He was very patient and gave me good feedback.
You can watch a Youtube video about throwing a football but the video won't tell you that your arm is not going back far enough or that your shoulders aren't square. The feedback is precious.
This article by Atul Gawande talks about coaching at the highest levels of performance. Coaching is standard for athletes and musicians but not so for other professions including surgery. Gawande argues that coaching is helpful not only at the bottom levels of a profession but at the top levels as well. Coaching for professional athletes and musicians is appealing because the performance is public and subject to scrutiny and fault-finding, coach or no coach. Surgery, however, is a private affair and the outcome appear more concrete. Gawande is an elite surgeon but one of his patients showed concern that a surgeon "coach" was present for her procedure.
Fortunately, preaching is public and its been easy for me to find a coach who can evaluate my sermons and give feedback on my content. Its the other aspects of being a pastor that are much more difficult to evaluate. I hope I will always be open to getting better.