What George Washington teaches us about reading the Bible 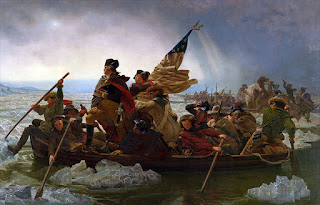 This post is dedicated to Fred Gilham whose paper inspired this idea.

It’s the man standing in the center, rising up higher and straighter than anyone else. George Washington. He is the center of the picture.

He makes up only a small portion of the surface area of the painting. But the picture would not be meaningful without him. He’s the one who made the decision to cross the Delaware River in the middle of the night in order to surprise the Hessian army (artistic license made it a daytime crossing). He’s the one who led his exhausted troops through the freezing cold on that Christmas evening in 1776. The credit for victory in the Battle of Trenton goes to him. All the elements of the story come together because of him.

By contrast, the centerpiece of the Bible is obscured. Most people read the Bible as a disparate collection of stories and rules. It’s a jumble of conflicting accounts, moral fables, arbitrary regulations, and senseless violence. The stories don’t seem related. Themes do not span across authors or books. The God of the Old Testament is vindictive and cruel whereas the God of the New Testament is gentle and patient. And that’s only what Christians think.

One method of determining the main point of a book is to look at its ending. In Revelation, Jesus ascends to the throne of earth and is united with his bride, the church. The New Jerusalem will have a tree of life in its center (an echo from Genesis) but there will be no temple because Jesus is the temple. By this method and others, Jesus is the centerpiece of the Bible. He is the gracious redeemer who rescues and transforms a corrupt and undeserving people.

The Bible concerns the grace of Jesus Christ. The Old Covenant, with its rules and regulations, is the backdrop. It’s the ice and freezing water of the Delaware River. It’s the ominous skies. It’s the obstacle that is meant to be broken through. The Old Covenant takes up much of the surface area of the Bible but it makes what Jesus did meaningful.

If Jesus is the centerpiece, the challenge is determining how the rest of scripture points to Him. It’s not hard to make connections with broad strokes. But it’s much tougher when you dig down into the details. Yet we rest assured, for in all our study, we know how the story ends and who the centerpiece is.

So the next time you’re reading the Bible and you're lost in some ice floe in Leviticus or the clouds of Lamentations, remember the point of the picture. Examine the text carefully but don’t lose sight of how the story ends and who the backdrop is pointing to.