Bowen Theory and the Chinese Family

May 18, 2012
Another thing I talked about at the fatherhood workshop was Bowen family systems therapy and how well it captures the typical Chinese family dynamic. The essence of Bowen theory is that the family is a unit, not just a collection of individuals. That means when one person changes, the dynamic of the rest of the family changes along with it. This understanding of the family fits well with the communal nature of Chinese culture.

One of the eight main concepts of Bowen theory is triangles. According to Bowen, a triangle is more stable than a dyad. But the problem in a triangle is that there's always someone left out. Let's take a married couple without kids (a dyad). They might look like this below. (These pictures are really crappy. I wish I was more tech-savvy)

In the picture above, you have marital bliss without children. There is intimacy in the relationship. But once you add a child to the family, the system changes. That's what we see in stage 1 below. 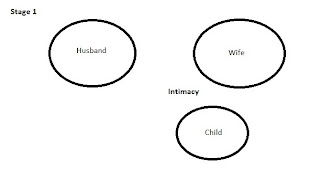 In Stage 1 above, the intimacy shifts to the mother-child relationship and the husband becomes the outsider. His role as the intimate partner is supplanted by the baby entering into the family. This creates tension. Stage 2 below shows how a husband might respond as outsider:

In Stage 3 above, the husband says "Forget this, I'm going to the office" and escapes from the family into work or other interests apart from the family. The wife and the child begin a codependent relationship where each have their significance and worth is tied up in how they respond to each other. The whole stage thing is my own depiction - it's just easier to illustrate.

Stage 3 is the classic passive father, controlling mother dynamic seen in so many Chinese families. Chinese culture worships the mother-child relationship and supports the mother as the dominant figure in the household. Fathers function primarily as providers and occasionally as the strict, detached disciplinarian. Mothers become enmeshed with their children and bitter and critical of their husbands for not being more like them. Children grow up with this model and replicate it with their own spouses and children. That's how  sin gets passed down generation by generation. The specifics vary but the gist is the same.

But the gospel gives us something redemptive in this whole story. It's pretty neat that as a Christian, every human relationship is a triangle. There's the two people involved and God, who is content to be the outsider. God is both a stabilizing and destabilizing force. If the relationship is abusive, He may draw the victim closer to Himself and away from the abuser. If the relationship is healthy, He may draw one person closer to create a hunger from intimacy from the other. The way out of dysfunctional triangle is to spread the tension to a 3rd party who can handle it. And that's where the gospel comes in. What we're looking for is every human relationship to triangulate with God.