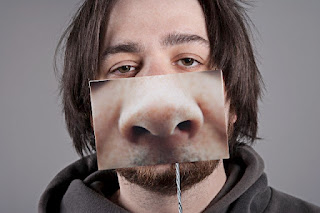 On Monday of last week, I had my nose moved.

After introducing himself, the ear-nose-throat surgeon asked if I had a picture of myself prior to the injury. He wanted to know if I always looked like I did.

It was a good question. My mom was asking herself the same thing when she saw me the week prior. I had to check pictures myself to confirm that indeed, my nose was straight before.

He confirmed based on my driver's license picture that I had indeed been better (or worse) looking than before.

He said there was no obstruction in my nose and it would heal fine so any further procedure would be considered "purely cosmetic". That made me feel like a shallow person.

To defend against this implication, I told him my glasses no longer sat centered on my nose and it made me dizzy to have one lens close to my face and the other farther away. He didn't sound very convinced.

He told me I had two options - have my nose moved while under a local anesthetic or have it done while put to sleep, so he could move it easier without patient commentary. I choose the first option. I had already watched the youtube video of a closed reduction and I wanted it done as quickly as possible.

Before starting, the doctor had me sign a waiver indicating I understood this procedure might not lead to a perfect face. I had secretly hoped he would leave me better-looking.

A closed reduction consists of the doctor sticking forceps down your nasal passage to hold a bone in place while he shoves the bridge of the nose towards center. There is nothing elegant or delicate about it.  He gave me a local anesthetic spray and then left for a few minutes to let it set.

It is not enjoyable to have someone pushing on your nose and hearing cracking as the cartilage is moved around. It hurt too. But the interesting thing is how iterative the process is. He would push for awhile, I'd look in the mirror and say "OK, better" and then he'd push a little more and then I'd check and say "Getting there". After the third pushing session, I was getting worn out from bracing myself and told him I wasn't aiming for perfect.

The doctor told once the swelling subsided and if I was still dissatisfied, I could come back anytime in the next couple weeks for another nose nudging. The cartilage takes 4-6 weeks to set so I have time to consider further cosmetic enhancement.

I doubt I will go back. I wanted straighter and I got it. It is a psychological thing more than anything else. Although I no longer qualify for the beauty contests I dream about, my face certainly has more character than it had before.