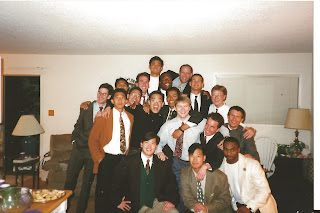 During the mid-1990s, one constant topic in my college fellowship was dating. Campus Crusade for Christ (now Cru) was big on this. As men, we were encouraged to go group dates, heard talks about being initiators, and had small group discussions about dating/marriage. My campus director, Rod Howard, introduced me to Josh Harris' cassette (!) series before he even wrote his seminal book. This environment influenced me profoundly.


So before Judy and I started dating, I had already decided on my Big Three - that is, the three non-negotiable qualities for the woman I wanted to marry. There aren't many dating principles that I would still uphold after twenty years. I'm certainly no longer a proponent of courtship a la Josh Harris / Bill Gothard-style. I'm much more receptive to different types of dating arrangements. I can find biblical wisdom in arranged marriages. But one thing I feel pretty good about almost twenty years later is this set of non-negotiables. They are:

1) A sense of being loved: It was important to me that the woman I marry have a sense of security and worth that was independent of herself. It had to be external understanding of worth. Today, we might call it positive self-esteem. But its not exactly that, its a sense that you are loved not because you're entitled to it or deserve it but the kind of unconditional affection that can only be found in Jesus. It also exhibits itself in humility. One of the things I love about Judy and could be a fourth non-negotiable is that when I told Judy she had these qualities, she didn't believe me.

2) The ability to catch a dream: Everyone has dreams but I wanted to be with someone who I could share my dreams with. A woman who would get excited about the things I'm excited about and have a similar passion for people and God. A woman who was willing to support the dreams we both felt God was calling us to. I wasn't concerned about whether my future wife would have her own dreams. In that sense, this ability is a complementary quality. It wasn't that I didn't want to support her dreams - its just that I believed a husband's role is be the dreamer and lead his family accordingly. I still believe that. 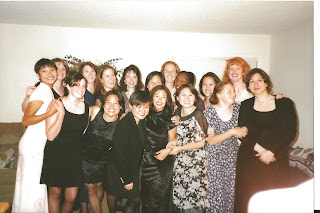 3) Gentleness: I'm not a gentle person. I'm aggressive and confrontational. I'm outgoing and direct. I enjoy dominance. I knew I needed someone with a gentle and kind spirit. I did not want another attention whore like myself. It would not work well. I wanted someone more careful with her tongue, reserved in emotional expression, and cautious and thoughtful than I am.

How can you tell if someone meets the non-negotiables? Well, it certainly helped that we had been friends for three years and that the past year, we had lived in the same dorm together. As upperclassmen, we both moved back into the dorms as an outreach.

Since there is no objective benchmark for these qualities, the best way to tell someone's suitability for marriage is his/her receptiveness to change. I know its When I first met Judy, she was this shy, insecure girl who had no opinions about anything and would laugh indiscriminately at people's jokes. This annoyed me to no end. But as I got to know her there was more depth and less of the insecurity and by her senior year, I could see how Jesus has changed her life. She opened up to me about her struggles and I watched her become a leader in Crusade. So the quality I would look for in a disciple of Jesus is also the one I would look for in a life partner: the ability to be teachable. Even if she didn't have the non-negotiable qualities to the fullest extent I might imagine, I could see how much she had grown. There was no guarantee that she would continue to grow in the future but it boded well.

Another advantage of the non-negotiables is that they helped focus me on the important stuff. There are lots of little things that bother me about our fit as a couple. We're both extremely near-sighted (which is not good for our kids). We're both not particularly clean or tidy. I wanted a tall wife so that we could have tall kids that would play in the NBA. I love to dance and most women do but somehow I picked a life partner who is not naturally disposed to grooving to music. But if I take a wider perspective, as these non-negotiables help me to do, it makes me much more appreciative of who God has made her to be.

Finally, best thing about these non-negotiables isn't their substance but the fact that before we got married, I truly believed Judy met the criteria. It is possible that I suffered then (and now) from confirmation bias. And yet I sought counsel from many friends that knew both of us (an advantage of intra-fellowship dating) and they all confirmed what I suspected. In the end, it was - and continues to be - a faith process to believe and trust how God is working in her life.

I would never recommend this exact set of criteria to another person. These qualities are custom for me. Looking back, what impresses me about them is that I had really thought this through at a young age. Recently, a group of guys in our church just finished watching the Authentic Manhood video series. It starts off a little slow but gathers steam. Episode 6 is about the stages of a man's life and it is powerful. The speaker talks about how you can sow in one season of life and reap in another. It means the blessings (or curses) from a life decision may not be felt until many years down the road. 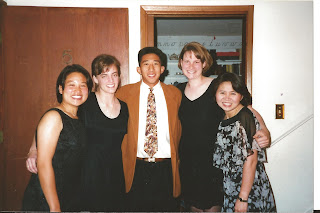 It is a testament to the grace of God that some belief I had when I was 19-20 years old has shaped the course of my life in the best possible way. Having Judy in my life is a constant source of blessing to me through her encouragement to me as a husband and father, through her walking together with me in ministry, and through her as a life companion. It is amazing to consider how God was able to give me all I imagined in ways that I couldn't have imagined at the time.