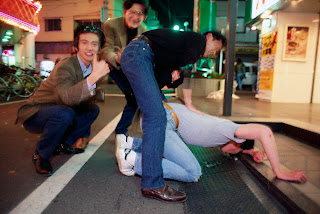 Some responses to my last posts about why Asian American men marry later: desire for comfort, preference and privilege, aging well (decision paralysis because of too many options?), perfectionism, poor parental models of marriage, screwed up idea of relationships, low emotional intelligence, and being the most unappealing men in America (more on this in a future post).

With the exception of us of being unappealing, I don't get how all these factors are unique to Asian American men but not women. I wonder if there's something unique about the way men respond to these factors that make marriage less accessible (or attractive) for us. For instance, low emotional intelligence may affect men more than women since men initiate and lead relationships. Similarly, having a conservative, risk-averse outlook is less attractive in a man than a woman. It will also keep a guy from asking girls out.

I told my brother about my suspicions. When I got to the one about us maturing later, he nodded his head sagely. He quoted an ancient Chinese proverb.

Adolescent rebellion is the wind. He explained that the children of over-achieving immigrants tended to experience a repressive childhood. We were conditioned to perform well in school, control our emotions, sit still for long periods of time, finish every grain of rice in our bowl, not drink or smoke, and never spend money. Asian American girls manage okay with this (sure some go crazy in college) but repressed testosterone-fueled Asian American guys blossom later. And once we get out into the real world and finally have a chance to party, buy fashionable clothes, lift weights, make some money, and not have a bowl haircut,  then we really go crazy. So it takes us longer to work the wildness out of our system.

There must be some truth in this. Prolonged adolescence is easily accessible for all kinds of men today, at every echelon of the socio-economic ladder. I'm just not sure the late wind has to blow that hard, it probably just comes later for us.

*It's not an ancient Chinese proverb but it should be one