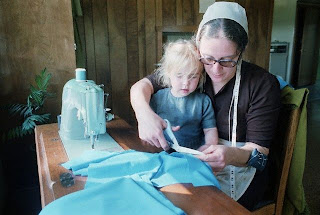 When we tell people that we're homeschooling our children, one of the most common questions we get in response is "So what do you do for socialization?" Truth be told, people don't use those exact words but I know what they're thinking.

It's because that's exactly how I regarded home schooling before we jumped in last year. It cannot possibly be adequate socialization. I imagined a group of children dressed in Amish clothes cloistered in a stuffy kitchen with a woman holding a blackboard and chalk. I believed home schooling is socially stifling and turns kids into book smart misfits.

More = Better: When we talk about socialization, it often feels like we're talking about sunshine, water, and exercise. The more you get the better.  It follows then that the more people you're around, the better the socialization. But this is silly. It's not the quantity of people you spend time with, it's the quality of the interaction and kind of people you're around. There's double talk with parents in this regard. What we say is not what we do.

Parents actually want less: Based on what we actually do, we want narrow socialization opportunities for our children. Based on school choice and where we buy homes, what we really want is diversity as long as the following criteria are met: high API scores, low crime rate, involved and college-educated parents, families who speak English as a first language, appreciating real estate value, etc. Based on what we do, we actually want less socialization, or at least the kind that meets our criteria.

Our family was involved with a parent participation public school for five years. It narrowed our social circle. After all, parent involvement is highly correlated with an intact family, a stay-home parent, affluence, and largely white/educated/Christian family values. Thus there was a much lower proportion of immigrant and low-income families in our school relative to the other public schools in our district.

I had a moment of refreshing candor from a white father who teaches in a public school. He would never want his kids to attend the school he teaches at and he doesn't like the fact that so many of the kids in his local neighborhood school (in a nice area with high API scores!) don't speak English as their first language. He wants less socialization not more and he's not going to disguise his narrow mindset as an open and accepting one.

I don't think home schooling is a magic bullet. There are considerable disadvantages.  It's lonely at times. Each day is exhausting and stressful. Your kids are missing out on a tremendous societal rite of passage. It exposes all kinds of personal issues. Your kids may not like it (one of ours hated this past year). It's a definite "off-the-grid" type of option.

Despite all that, the nature of childhood education is brainwashing. You can either do it yourself or let someone else do it. Either way, socialization will happen. My point is let's not pretend that we want broader socialization for our kids when what we truly want is narrow.