You can spend too much time with your kids 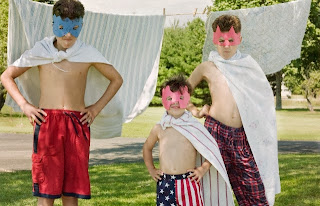 I read John Rosemond's stuff. He is a so-called parenting expert. It's not a title he likes because he sees parenting as common sense. But common sense is increasingly less common in today's society. I'm totally with him on that. In this month's column, he responds to a parent's question about what constitutes normal behavior. (I've put the entire thing here because his website doesn't have it yet)

Q: Several months back, our just-turned 3-year-old son invented an imaginary friend whom he calls Larry. We're worried because he seems involved to the point of being obsessed with him. He plays with Larry almost constantly, talking to him all the while. When we go somewhere, I have to pretend that Larry is coming along too. I've drawn the line at setting a place at the table for him, explaining to our son that I feed Larry after he's gone to bed. When our son is with other children his age, he plays well, but has a sort of take-it-or-leave-it attitude toward play dates. I've heard that some kids this age have imaginary friends, but this seems a bit much. What do you think?


A: I think today's parents-moms, especially-worry entirely too much about anything that seems to fall even a tad outside the boundaries of normal behavior. That tendency is exacerbated by the fact that as a culture, we seem to have forgotten that children can be odd at times, some more than others. Lots of odd in a child may be cause for concern, but one odd thing rarely merits more than a tolerant shrug.
I'm actually glad to hear that there are still kids out there who possess magnificent imaginations. Before television, video games, and other electronic suppressants, imaginary friends were commonplace. Both of my children had imaginary playmates. Eric had Jackson Jonesberry and Amy had Shinyarinka Sinum. No kidding. These playmates, who seemed quite real to the kids, occupied lots of their time, which was just fine with their mother and me.
Another factor I think has contributed to the demise of the imaginary playmate is the corresponding increase in parents who play with their children. Some playful interaction between parent and child is fine, of course, but a line can be crossed at which point the child becomes dependent upon the parent for entertainment. When children were expected to entertain themselves for the most part, they were forced to be much more creative and imaginative than today's kids seem, on the whole, to be.
Unobstructed by electronics or over-involved parents, the imaginary friend usually makes his or her appearance around a child's third birthday. These friends are quite real to the kids in question-call them "functional hallucinations"-evidenced by the fact that a child is apt to become quite indignant, even upset, if someone denies that his friend actually exists.
Imaginary friends are a positive influence in a number of important ways. Most obviously, they are both a product of and a stimulant to imagination. They exercise and help to expand children's creative capacities. These fictional friends also help develop social skills, especially the ability to give-and-take. They promote self-reliance; specifically, the ability to self-occupy, which is obviously good for both parents and children. Because children talk constantly to their imaginary friends, they strengthen language skills. In short, there's everything good and nothing bad about these hallucinatory companions. They usually disappear by the fifth birthday, but even the occasional appearance beyond that point is nothing to be concerned about.
My advice: Relax and enjoy the break.

As Rosemond observes, imaginary friends are superior to real friends in the following ways:
1) They're always there when you need them
2) They make great listeners and don't talk back
3) You can order them around and they don't complain

I could use some more imaginary friends but unfortunately my creative energy has been stifled by Plants vs. Zombies 2, on-line shopping, and watching Breaking Bad season 5 pt. 2 (Netflix UK with Hola unblocker). My ideal imaginary friend is a zombified version of Jesse Pinkman. Oh wait.

Anyways, the point of my post is that it's possible to spend too much time with your kids. When my kids were younger, I would play imaginary games with them. I would concoct elaborate scenarios like pretending the family room couch is a boat in the middle of the ocean and I am the shark trying to eat them. But then I would have to go to work and the fun would stop. They would protest and be disappointed and I would feel very important and critical to my kids' well-being.

But my kids quickly figured out that they could play imaginary games when I'm not around. They would play the boat game and even invent new ones. I could hardly believe they could have so much fun without me.

I'm not against spending time with your kids and as a father, I want to spend as much time with them as possible. But kids are incredibly resilient and at a certain point, I realized that being their savior in every situation is not only impossible but undesirable and harmful.

Parents cannot be the center of their children's universe. We are not responsible for entertaining our kids. They own that. Yes, we bear some of the consequences if they paint the piano out of boredom. But as they get older, one important lesson Judy and I want to teach our kids is how to self-occupy themselves by engaging their imagination.

It's also about not getting stressed out if their behavior does not fit "normal". I've never been called "normal". I actually think I'm a little strange. So are most of my friends. I don't actually know any normal people. I guess what parents are really concerned is that there's many things in their kids' lives that they can't control. Perhaps that's the biggest lesson for us.

In any case, if I didn't have a brother, I'm sure I would have had an imaginary friend. He would have been the big brother that I always wanted. He would have taught me how to throw a football, how to swing a bat, and we would definitely go on adventures together. But unlike this kid, I would have given Larry more of a chance to express himself. I wouldn't try to dominate the conversation.

Everyone should have a friend as close as Larry.