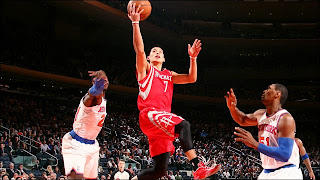 Jeremy Lin, by most accounts, is having a an excellent season. After sub-par season in Houston last year, Lin is meeting the lofty expectations that followed him after he left New York. And he is no less important of a role model to Asian Americans.  This encapsulates the argument Jay Kaspian Kang puts forward in a recent article.

Kang acknowledges the difficulty of negotiating two extremes - on the one hand, Jeremy Lin is a really big deal and on the other, we should act as it's perfectly normal for Asian Americans to make the NBA. We don't have the luxury to pretend we don't need Jeremy Lin or act as if he's not that big of a deal. Kang writes:

It's discomforting to say, but the Asian American community still needs Jeremy Lin as a rallying point. The "Chink in the Armor" moment marked the first time in my life that we, as a unified people, voiced our outrage. Since then, Asian American outrage has become its own meme. Some video will come out from some awful band or some awful UCLA student or some awful record company invested in turning young kids into viral singing stars and the only reason this viral trash makes the rounds is because that awful entity said or sang something offensive about Asian people.

Yang acknowledged the offensiveness of the song, but wondered aloud if we [Asian Americans] had become too easy to troll. After all, "Asian Girlz" had almost no YouTube views and the song's notoriety came almost entirely from people who shame-linked it through social media. Why, Yang asked, were we paying so much attention to these sorts of easily shareable, mostly meaningless offenses?

I feel the same way. I emailed Kathy Khang, a prominent Asian American Christian leader who helped draft the open letter regarding evangelical discrimination against Asian Americans, about her thoughts on the Jeremy Lin article. I told her I hate being known, as many vocal Christians are, for being known more for what I stand against than what I stand for.

She agreed that the loudest Christians are those who stand against issues - abortion, homosexuality, etc. But she disagreed on the second part. She did not understand how speaking up against systemic racism is being overly sensitive.

I feel torn about this issue. I want to stand up for Asian American issues but I'm afraid of being perceived as whiny and complaining. I don't want to be the over-sensitive person that everyone avoids because they make a big deal over the smallest insult.

If I were the average American white person, I would be thinking "What are these Asians complaining about? They're the model minority and they're whining about being portrayed as nerdy?"

But later it hit me. Kathy Khang isn't afraid to speak up for what she feels is important and certainly not afraid of being viewed as whiny and over-sensitive. People can call her whatever they want but it won't stop her from getting the message out. She fully appreciates that most people, including Asian Americans, will not appreciate nor understand the significance of systemic racism.

And yet if systemic racism exists (and I believe it does) then it follows that many people will not be aware of it. It's entirely possible that discrimination is so embedded in our society that most people might not notice how even our language is biased against certain cultures. That means a certain amount of shame, humiliation, and rejection is necessary to get the message out.

This Thursday, I'm thankful for thought leaders like Kang and Khang who highlight these types of issues and I pray they keep doing what they do. And you bet I'm thankful for Jeremy Lin. But most of all, I'm thankful that as a new creation in Christ, I'm no longer a prisoner to my own over-sensitivity.