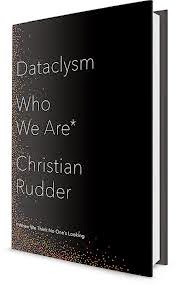 I love the OKCupid blog. Christian Rudder, an Harvard alum and dating site founder, writes  about the three "D"s of data, deception, and dating.  One of my favorite posts is this one from 2009, which connects data, deception, and dating with on another issue I'm passionate about - race. I'm fascinated by how we're walking contradictions when it comes to romance. We don't do what we say and most of the time, we're not even fully aware of the type of people we're attracted to (or repulsed by).

So when I heard he was coming out with a book I was pretty excited and finally got a copy from the library. The official title is Dataclysm: Who We Are (When We Think No One's Looking).

Wow, it was a disappointing read. The book is about self-deception and how big data now allows us to measure the precise distance between our public and private persona. It succeeds in broaching the topic but unfortunately it's a shallow dive. Here are two observations:

1) The book does not contain much about dating: Rudder gathers data from facebook, twitter, all the major social networking sites. And the stuff is somewhat interesting but most of it is not about dating. And the stuff that is about dating he's already written about in his blog. The only difference is that his insights from the book are longer, more rambly, and less humorous.

He has a unique writing style and I wanted a deeper look into the dating stuff and more interesting observations about the self-deceptions people engage in when dating. Everyone fools themselves when it comes to romantic relationships. Why not dig where there's plenty of gold left?

For example, his first chapter titled "Wooderson's Law" concerns how a woman's attractiveness  a man peaks at age 22, regardless of the age of the man. That means a 50-year old man and an 18-year old man both find 22 year old women the absolute hottest. Women, on the other hand, are more assortative in regards to age. According to Rudder's OKCupid data, a 55-year old woman finds a 46-year man to be peak hotness.

This is not news to anyone who is modestly familiar with the dynamics of today's sexual marketplace. Worse yet, this disparity in how attractiveness works between men and women was already explored in the teaser articles that accompanied the book's release. The book doesn't add much except a little more pontificating.

Likewise, the second chapter is about being interesting in order to attract people of the opposite sex. The ability to trigger polarizing reactions reap great benefit in terms of message response rate. The idea is not to be "meh" - the failure to elicit a strong emotional response from others. A woman with blue hair or multiple body piercings stands out a lot more than a woman posing with a cat or a dog. This makes sense when you think about the sheer volume of profiles people have to scan but I was hoping for something more.

Chapter four is pretty lame in terms of exploring new ideas. The argument is that marital strength correlates with how embedded your personal networks are. The more friends you have in common between you and your spouse, the stronger your marriage is. That is just not that interesting. Correlation is not causation, blah blah and it feels like common sense.

2) The book does not have a unifying, compelling theme: Most popular nonfiction (anything by Malcolm Gladwell, the Freakanomics series) is  both nerdy AND interesting. That is extremely challenging to do. This book illustrates how difficult it is to pull of well. What makes Gladwell so popular is that he's able to weave a coherent, enthralling narrative out of seemingly unrelated people, ideas and fields. The Freakanomics series takes specific behavioral science principles and applies them to real-life situations. In each of those books, there's a unifying theme and the authors make it interesting. Unfortunately, Rudder does not succeed in Dataclysm.

The latter chapters concerned how dating sites and twitter have changed how we use language and what that illustrates about who we are. It didn't relate very much to dating so I tuned out.

The best chapter in the book is called "The Confounding Factor" and it's about race. It's a more extensive exploration into insights that Rudder began in his blog. He simply adds more data from other dating sites but the conclusions are the same. The net is Asian men are like Black women - the opposite sex does not find them sexy or appealing. I don't need a book to tell me that.

The only mildly interesting insight was that being Asian,  Latino, or Black plus white instantly makes you more attractive to the opposite sex. Being a half-white, half-black women garnered a 24% boost in attractiveness from white men (vs. being black alone). Being a half-white and half-Asian guy provided a 32% boost in attractiveness from white women (vs. being Asian alone). Wow. I will tell my kids to marry white people for the sake of my grandchildren.

The book is about how data reveals our own self-deception but I was hoping for more concrete ways to tell ourselves the truth, especially in regards to dating. After all, the reason I like Rudder isn't just because he knows data but because he applies big data analysis to dating. That's OKCupid's niche. And by departing from that niche, it was a significant let-down. Ultimately, Rudder's book is guilty of doing what his second chapter warned against. It became too common and not polarizing. Meh.