The Power of Outsiders 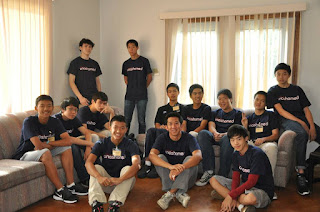 We sat at a table at a Sonic Drive-In in Warsaw, Missouri, trying not to move under the heat and humidity. A 13-year old boy walked around us, pressing buttons on various call boxes and, without waiting for someone to pick up, immediately proceeded to the next one.

"So what's the theme this year?" asked the college student wearing a $2 Justin Bieber t-shirt.

"Unashamed" replied the teenage boy, slender in face and stature.

Her pause before the adjectives indicated she had more derogatory thoughts but she was able to suppress them and come up with a diplomatic response. I thought about telling her I came up with the theme but thought better of it.

Christian retreats with the theme "unashamed" typically quote something in Romans or 2 Timothy about how followers of Jesus should not be ashamed of the gospel. The subject is the believer and the object is the gospel. It is imperative for a believer to live boldly on behalf of the gospel, to share it with others, and not to be ashamed of his identity. I'm cool with that but it wasn't what I was going for.

Mike and Jenny, the wonderful couple coordinating the retreat, asked me as the key note speaker to come up with the theme for this six-day long retreat attended by eighty youth. Kids hailed from Iowa, Illinois, Arkansas, Mississippi, Oklahoma, Texas, and Missouri. My friend Peter, who had spoken at this retreat in past years, told me many of the kids experienced racial discrimination as one of few Asians in their school and city. This factor made this camp unique from the typical California metro area Chinese church youth retreat because it was a spiritual and social refuge for kids who make up a small ethnic remnant in their own community. Most of the kids in the bay area attend schools where Asians make up 20-60% of the student population, compared to 2-6% for kids in the Midwest. It's a totally different ballgame.

I tasted it during the year I spent attending North Springs High and Sandy Springs Middle in North Fulton County, Georgia. Coming from Asian-saturated San Jose, it was a culture shock. I have vivid memories of being bullied, overlooked, and embarrassed about my ethnic identity. It was probably worse to be invisible than it was to endure racial taunts. Interestingly enough, I experienced the worst discrimination from blacks and Hispanics. The low bully the lowest. It is painful to be an outsider.

And yet everyone can relate to being an outsider. We are all outsiders, outcasts, and exiles in some significant whether because of gender, socio economic status, mental/physical handicap, or ethnicity. As I brainstormed themes, I thought of three women who were socially alienated, foreigners to Israel, and possessed no rights, and yet were chosen to be part of the ancestry of Jesus. God is in the business of selecting outcasts to carry forward his redemptive plan. In Hebrews 2:11, Jesus sanctifies believers and is not ashamed to call them brothers and sisters. The subject is God and the object is the believer. That's the essence of the gospel - not what we do for God but what God has accomplished on our behalf. "Unashamed" does not describe our attitude towards the gospel as much as it describes the Father's sentiment towards his children because of the Son. This is what I was going for.

Of course there were more conventional "unashamed" moments. A 16-year old boy stood in front of a Wal-Mart in ninety degree heat and shared his testimony to complete strangers.  It was one of the first times he had ever talked about his faith in public. Many of the kids wrote out their testimonies for the first time. Students initiated spiritual conversations with nursing home residents. There were priceless images as they prayed for each other, hand-in-hand.

Throughout the six days of camp, I was delighted to discover how friendly, mature, welcoming, and earnest the kids were. There was a little about the camp they took for granted. They were genuinely appreciative of my presence and I loved their curiosity. I especially enjoyed leading a group of older high school and college guys. They took initiative to lead, serve, and love all the attendees. When you experience the pain of being an outsider, you have a special empathy and gratitude for others.

I wanted to ask the students about their experience of racial discrimination but the demanding schedule afforded little opportunity. This would be a painful place to explore. But during the campfire on the last evening, there were glimpses. The lakeside atmosphere was bucolic. Muddy buddies (or "puppy chow") were passed around. Benches collapsed. And a young man shared about the loneliness of being the only Asian kid in his school and how the camp was a sanctuary for him. It was a place for him to belong and build and learn and grow in ways the outside world could not encourage. Many kids shared about the power of the camp and the enduring fellowship, year after year, for the attendees. There is a tremendous power in being an outsider - a unique perspective and a capacity to bond with others because of shared pain.

Pastor Billy Ko started the Christian Witness Center (CWC), the organization sponsoring the camp, in 1980 when he realized there was a tremendous need to reach Chinese exchange students in the Midwest. There were few Chinese churches and the Midwest was an isolated environment for foreigners. CWC was started to reach outsiders and since then, the ministry has multiplied exponentially. Outsiders have a unique influence.

My prayer is for these young people to see Jesus neither as an extension of their parents' faith nor as the Caucasian ambassador for Western civilization but as an elder brother in pursuit of his outcast siblings. If Jesus favors a particular nation or group of people, it is the Jews. And these poor people have been outsiders throughout their entire history. Indeed, Jesus warned his followers to be wary of the relationship with larger society. We were never intended to fit in. God chooses outsiders. The Son of Man became flesh and went outside heaven's camp in order to bring His lost family members home. He is unashamed to call us his own.