A view from the grave 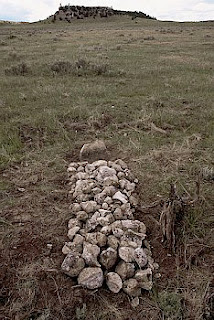 I did the memorial service of a friend in our church recently. He was seventy-three years old and died after a two month battle with cancer.

He was a faithful servant in our church but my feelings towards him would often alternate between fear and frustration. He had a gruff demeanor that could be quite brusque and unapproachable.

A couple weeks before he died, I visited him at a skilled nursing facility in Saratoga. I was late finding him and caught him during his physical therapy session. I walked in and he looked up at me. He didn't say "Hello" or "It's great to see Fred" or even crack a smile. Instead, he said sternly: "I'm not ready for you right now. You can come back later." In anticipation of this kind of response, I did some work on my laptop while I waited for him outside his room.
My frustration with him concerned his lack of vulnerability. He wasn't open about his weaknesses, wasn't expressive with his emotions, and he was very difficult to read. He was the most reliable, self-controlled person I have every met and his staunch uprightness often made him feel inaccessible as a human being.

And yet after his death, I discovered an untapped reservoir of positive feelings for him. It was like I finally saw him the way God does. After all, he and his wife had opened their home to dozens of people over the past fifty years - a list including foster children, exchange students, two sisters from Mongolia (who referred to him as their father), and now a woman from our church and her two college-aged daughters.

Back in Saratoga after finishing his physical therapy, he would only talk with me about the good accomplished because of his suffering. He expressed gratitude for the outpouring of support he had received from family and friends all over the world. He shared how his illness had facilitated a family reconciliation. He talked about how his wife's character had grown through his suffering. He was prepared to meet the Father. His faith was not a show he put on for Sundays. It wasn't a hat he wore. This who he was through and through as a person.

As I prepared for the memorial service, I had this sense that I finally understood the gift of who he was as a person. I know I'm not alone in the timing of this kind of realization. I hate falling victim to the universal phenomenon of gaining a new appreciation for someone only after he/she is gone. I also understand it's inherent to our fallen human condition. But after this experience with my friend, I thought - wouldn't it be awesome if I could view people alive today as if they died? How amazing would it be to view people from the grave?

That must be how God sees us. He gazes on all of our flaws, weaknesses, and pain and yet is able to fully appreciate and enjoy the gift of who we are as His unique and beloved children. He has a perfect perspective of exactly who we are and celebrates every little detail that makes up our being. In 2 Corinthians 5, the Apostle Paul talks about how each believer is a new creation in Christ. And God is making everything new - we no longer see anyone from a flawed perspective - we see people from the grave - as if their old, tainted nature is gone and something new and good and amazing has taken its place.

I tried putting on this perspective while I was arguing with my wife. It's weird to imagine someone dead who is sitting, breathing, and making noises in front of you. And not surprisingly, I did not happen across a large untapped reservoir of positive feelings I have for my wife. Well, I did find compassion but it was more like baby pool-sized.

It's easy to feel guilty and defeated after this kind of attempt. It's tempting to feel inadequate because I can't manufacture the necessary passionate outpouring that I feel should be triggered with this kind of thinking. But the victory wasn't the emotional outcome but the act of imagining an alternate possibility of seeing my wife and others - the view from the grave.


Thank you, Richard, for the lesson.