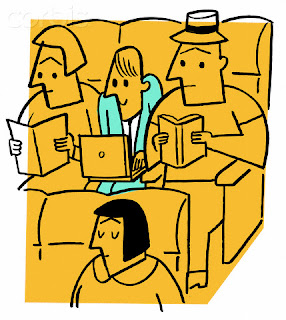 I helped the older Asian gentlemen put his backpack into the overhead luggage bin. I sat in the middle* and he had the window seat on our flight from London to San Francisco. It turns out he was an Oxford physics professor headed to Berkeley for a workshop. When I asked him about his travel, he told me he had visited the US too many times to count and he was always too busy to have time to sight-see. Later I praised Oxford as an exemplary institution of higher learning. He replied with a perfunctory "of course". After I told him I was a pastor, he kept calling me a priest and asked me about conducting mass. I couldn't tell if he was feigning ignorance or considered religion as beneath his superior intellect.

I love talking to people on planes. I'm an extrovert and it's a captive audience. These situations are great opportunities to get to know people. Sometimes people aren't in the mood to talk and that's fine. They're also my favorite chances to share the gospel. Of course the person has to be interested but the fun part is figuring out how to pique someone's interest in Jesus. It typically happens through a complaint.

The toughest part is getting past the annoying aspects of a person (and the other person need to overcome the annoying aspects of me). In this case, the professor's arrogance was seriously turning me off. I had to find ways to distract myself from his condescending tone while also asking better questions that would help him to open up.
When asked about his spiritual background, the professor claimed to have none, which is never true. In hopes of not explicitly offending me, he said he admired religion because it provided valuable guidance for how we should live. Direct questions about spirituality, especially when people find out I'm a pastor, are rarely effective in getting strangers to share their beliefs.

I finally got him going when I asked for an assessment of his current crop of PhD candidates. He commented that many of the overseas candidates were good at following instructions but lacked originality in their research. I sequed into asking him what he saw as the biggest problem in society today. He said it was the lack of morality, as exhibited by religious extremism like ISIS. He said the world suffered from a lack of fairness. If only the world was "fair" then we wouldn't have so many problems. He also made the common generalization that all religions teach people to be good but then observed that Islam extremism seemed to tends towards violence. From his standpoint, even Christian extremist groups tended to be more isolationist rather than promoting change through terrorism. We wondered together what the difference in the religions might be. Here's how our conversation continued:

Me: It seems that extremist violence often uses the rhetoric of justice and it's interesting that most Christians acknowledge that vengeance isn't a God-given right.
Professor: That's true - Islam teaches something about "an eye for an eye" doesn't it?**
Me: Yes, I've heard that. But as Christians we believe God's forgiveness is available to anyone, regardless of what he/she has done.
Professor: You mean it's condition-less?
Me: Exactly.

I've always used the term "unconditional" to describe God's forgiveness but "condition-less" works just as well. In some ways, it's more explanatory. I know the words mean the same thing but hearing it described with a different word made me think more deeply about how God's love reaches us without conditions, without barriers, without qualification. It was also insightful to hear someone unfamiliar with Christianity use a different word that helped me understand my faith better. It was awesome.

I also recognize our view on the difference between Christianity and Islam may be inaccurate. What I did find, after some Google research, is there aren't many clear explanations of how atonement works in Islam. Atonement is the process by which one's sin is forgiven. What was clear to me is atonement in Islam is primarily intrinsic to the person - emphasizing personal repentance and reparations for the sin. I did also notice the idea of justice and judgment is quite prominent in Islamic teaching. This emphasis appears in Christianity and Judaism but Jesus really messes this up. In any case, most of the stuff on the internet is Christians attacking Islam's understanding of the atonement and vice versa. I do wonder how a person can be capable of true repentance when evil is so pervasive and I look forward to future plane trips when a Muslim can help me understand this better.

*Sitting in the middle of a three-seat section is a great way to increase the likelihood of having a meaningful conversation. On a crowded flight, you have the opportunity to talk to two different captive people. However I'm pretty sure no one will actually follow this suggestion since the middle is the most uncomfortable seat and I got put there because I had booking problems.

**I didn't mention this but Islam, Judaism, and by extension, Christianity, all teach variations of this principle of justice but only Christianity has Jesus' corollary of turning the other cheek.