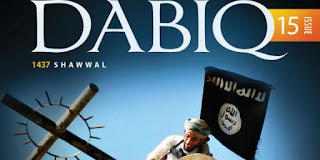 Sam Harris breaks down radical Islam - the beliefs of the Islamic State in this podcast. He references the publication of the Islamic State, Dabiq, Read this magazine at your own risk because it is terrifying. The publication is horrifying for many reasons - mostly because it’s true. It is extremely clear. ISIS is intent on killing people of the West. Make no mistake about it. It is not about our foreign policy, it is not about imperialism, it is not about excess, it is about our beliefs. We are disbelievers.

Harris is an atheist and it is fascinating to listen to the Dabiq writers describe Christianity from the perspective of another religion (radical Islam) and then hear Harris evaluate Christianity and radical Islam from the perspective of an atheist. He brings out good points. The Christian concept of trinity is a doctrine that is very difficult to describe. It’s so easy for us just say oh we’re not meant to understand this mystery of God. That’s such a cop out answer. Harris’ focus is on the religious idea of an after-life. He attempts to get his audience (mostly atheist I’m guessing) to empathize with the game-changing idea. If what we do in this life is secondary to eternal life after death, it creates tremendous incentives towards morally questionable activities (martyrdom, violence, evangelization, etc.).

It’s disturbing to read the testimony of Finnish woman who converted from Christianity to Islam and find common religious language that Christians to describe their conversion experience - the after life, simplicity, full devotion, etc.Certainly absent from her conversion testimony was a discussion of grace. In fact in her rebuke to Finnish Christians, she claims what Christians is a set of rules and regulations to live life. Indeed we do. That’s called the law and it didn’t work so well. It did not lead to salvation. That’s what the Muslims believe and they’re not wrong. It’s just incomplete. Living by rules and regulations does not get the job done. We need a savior. We need a complete internal renovation - to be transferred from the kingdom of darkness to the kingdom of light.

Harris says there’s something about radical Islam that is incredibly appealing to men or certain types of men. He’s absolutely correct. And he goes on to explain why.

First of all, radical Islam appeals to the male instinct to discuss and debate abstract philosophical ideas. There is a depth of religious thought and discussion that most strains of religion don’t get to. It’s reflective, profound, and meditative. Men love to talk about “What if” scenarios like “What’s the worst way to die?” During Jeremy Lin’s “Linsanity” craze in 2012, I posted about the relationship between hard work and the grace of God. On Facebook, a bunch of my male friends argued through comments about the role of his work ethic and opportunities he was given to succeed in the NBA. Finally, a woman interjected with “Shouldn’t you guys spend more time praying for Jeremy Lin than arguing about something so silly?” That effectively quashed our discussion. Men love to argue about abstract ideas and also find tangible ways to practice them. There are numerous well-defined practices of prayer and spiritual discipline that actively engage a man’s faith in Islam. Sam Harris calls it “yoga” and thus each Muslim male is a yoga practitioner. Conversely, in Christianity, a man attends church and is reduced to a passive spectator. If you’re not on the worship team or the pastor (very narrowly defined positions that few people can participate) then you can feel left out and emasculated. Sure, you can read your Bible and pray but those pursuits can feel very solitary and don’t give a sense of being connected to something better.

Second, radical Islam taps into the male instinct towards aggression and dominance. Put short, you get to kill people. You have a channel for your aggression to pursue evil and eradicate from the universe by fighting disbelievers and putting them to death. That’s where Harris is genius in coining the term “yoga assassin”. Radical Muslims are sent by God on a mission to eliminate disbelievers. You cannot fail at this mission because even if you die trying, that is still success. You have built-in channel to violently vent your fury. War is incredibly bonding because men need tangible enemies and Satan and his demonic forces are intangible opponents.

Third, and perhaps most importantly, radical Islam promotes the subjugation of women. As Harris describes, if you’re a guy who hasn’t experienced much success with women (and this is true for 83% of men under 30), you will find radical Islam appealing because women are subservient to you. You don’t have to work hard to impress them or play mind games or make a lot of money or whatever. Polygamy is encouraged and women have very well-defined and traditional roles.

And I realized his explanation doesn’t just apply to Islam but all strains of fundamentalism, including Christianity. Fundamentalism, at its core, is composed of an unwavering commitment to a narrowly defined set of beliefs, adherence to a set of rules and regulations, and a militant even violent approach to both people and ideas that threaten the first two qualities. Christian fundamentalism attracts both men and women to be sure, but the fact that fundamentalism attracts both conveys that it is appealing to men. From my understanding, progressive Christianity is female-dominated. Men feel increasingly alienated from mainstream Christianity. There’s an inherent fundamentalism (anger against the establishment and overt misogyny) to Donald Trump that makes him appealing to men. Hillary Clinton simply cannot match that. Men are leaving the organized church in droves, both Millenial and otherwise. I don’t believe Christianity was meant to be feminized. Thus, the questions I’m wrestling with are: What real and good aspects of fundamentalism and masculinity need to be recovered in Christianity? Where do we draw the line when those aspects become destructive and unhealthy?