Hillbilly Elegy: On the Limits of White Privilege 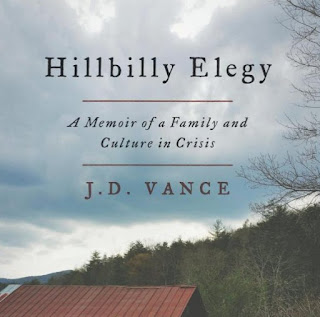 A Yale Law graduate gives his first-hand perspective of growing up amidst the white working class.

Hillbilly Elegy is a great book -  a well-written and poignant memoir of J.D. Vance’s childhood in small town Ohio and how his Appalachian-raised grandparents became the intact family that his biological parents never were. His dad abandoned him as a baby and his mom was a substance addict with a conga line of boyfriends and the accompanying rotation of homes. Vance’s memoir is every bit about being an exile in America as Russell Jeung’s book.

I recognize white privilege is a real thing. Being white confers advantages that ethnic minorities do not benefit from. And yet it's difficult to typify Vance’s experience as benefiting from white privilege due the tremendous disadvantages of his upbringing. J.D. Vance’s memoir offers a contrasting data point on how members of the white working class are constrained by the same forces that affect disadvantaged minorities. Here are two observations on the limits of white privilege:

Here’s how Vance describes his father’s evangelical faith: "Dad’s Christianity was one of withdrawal from society and defining morality as not participating in this or that particular social malady: the gay agenda, evolutionary theory, Clintonian liberalism, or extramarital sex.” This brings home the cliche about how we as Christians are known more for what we’re against than what we’re for. And here’s one of the sadder lines from the book: “Nor did I realize that the religious views I developed during my early years with Dad were sowing seeds for an outright rejection of the Christian faith.” (pg. 99)

At the conclusion of his memoir, Vance offers some suggestions the future of evangelicalism amidst the working class: “Are we tough enough to build a church that forces kids like me to engage with the world rather than withdraw from it? Are we tough enough to look ourselves in the mirror and admit that our conduct harms children?” (pg. 255) I appreciate the humility in the last question. He is cognizant that hillbilly culture, like all cultures, has some inherently destructive aspects.

As a pastor, the most poignant lesson was how his dad’s evangelicalism and its Pharisaical fear of everything “worldly” set him up to later reject the gospel. As a teenager, Vance was assured that as long as he didn’t listen to Satanic music, didn’t curse, and didn’t have premarital sex, he was living a good Christian life.  It brings home the cliche about how Christians are better known for what we’re against than what we’re for. The church can do much better having affirmative expressions of faith like missions, sports, music, and social justice. And finally I’m comforted by the reality that the gospel is the ultimate affirmation of humanity and our broken world. Jesus truly makes things new and he starts from the inside out. I’m grateful for the mentors and churches who have lived out this true image of the gospel rather than the false one Vance received.

2) Culture matters and Amy Chua is still my hero: Vance observes hillbilly culture shares characteristics with southern Blacks arriving from Detroit. “Hillbilly culture at the time (and maybe now) blended a robust sense of honor, devotion to family, and bizarre sexism into a sometimes explosive mix” (pg. 41). Cultural values like suspicion of authority, vigilante justice in the context of an honor and shame culture, and an understanding of masculinity that views educational attainment as feminine make it challenging for certain cultural groups to be upwardly mobile. Vance recounts a story of when his Uncle Jimmy was a child. During Christmas shopping season, Vance’s paternal grandparents, Papaw and Mamaw took toys off a store’s shelves, smashed them to the floor, and threw them all over the place. Towards the end of the encounter, Papaw threatens the store clerk with this: “If you say another word to my son, I will break your <bleep> neck”. All of this because earlier the clerk had asked young Jimmy not to play with the toys and leave the store.

Privilege consists of advantages that have nothing to do with one’s individual merit but rather the circumstances of one’s upbringing (i.e. the household income and level of education of one’s parents), skin color, or cultural heritage and values. Towards the end of his book Vance cites Raj Chetty’s 2014 study on geographic upward mobility. Vance notes two reasons for the uneven geographic distribution of opportunity: the prevalence of single parents and income segregation. As Vance puts it, "Growing up around a lot of single moms and dads and living where most of your neighbors are poor really narrows the realm of possibilities” (pg. 243). Intergenerational mobility is the ability of children born to poor parents to become affluent as adults. The study’s abstract draws a contrast between areas of lowest intergenerational mobility like Charlotte, NC to one of the highest, San Jose, CA. San Jose has high residential income segregation though this is somewhat mitigated by the fact many lower-income families are priced out of living here. And yet I suspect the biggest factor may be that as of 2000, 34% of San Jose was foreign-born, almost seven times that of Charlotte (5.3%) for the same time period. And there’s no doubt that in the 1970s and 1980s, a significant proportion of immigrants to the area were highly educated, foreign-born tech workers from Asia like my parents. Immigrants, especially those that are college-educated, tend to have a higher rate of intact families, which contributes to better financial outcomes for their children.

Amy Chua, Vance’s former Yale Law professor, is credited both for advising Vance at pivotal moment in his budding law career AND in encouraging him to write the book (her endorsement is listed first on the back of the hardcover edition). It is not lost on me the irony of a white male benefitting from the largesse of an Asian American woman (and the one who coined the term “Tiger Mom” no less). Many in the Asian American community don’t like Chua because she represents the idea of cultural superiority but count me as one of her admirers. Cultural values absolutely make a difference for socioeconomic outcomes and unfortunately, many cultural values do not change easily with government intervention.

In light of the above, Vance doesn’t have a lot of advice for the government. He recommends state laws push broader definitions of family so that relatives like grandparents, cousins, aunts, and uncles can step in when biological parents break down. He advocates stronger laws against residential income segregation - for communities to push for higher proportions of section 8 housing.

And yet Vance notes: “Government policy may be powerless to resolve other problems in our community. As a child, I associated accomplishments in school with femininity. Manliness meant strength, courage, and a willingness to fight, and later, success with girls. Boys who got good grades were ‘sissies’ or ‘faggots’” (pg. 245)

I love how he talks about the honor and shame culture of hillbillies. The most inspiring part of the book is an episode where Mamaw teaches Vance how to punch and use his strength on behalf of the weak - something I believe Jesus would have endorsed in the same manner as when he overturned the tables of the moneychangers - it was pre-meditated, calm, and in defense of others. As a middle schooler, Vance ends up sucker punching a bully who repeatedly terrorizes a classmate of his. His teacher lectures him but she is thankful for the justice he meted out that she could not. Hillbilly culture has inherent flaws and yet the gospel redemptive aspects - family loyalty and justice for the weak - shine through.