Humiliation as teacher of emotional intelligence 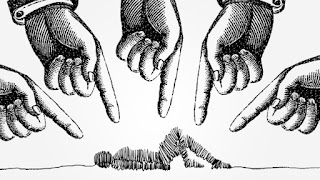 Back in 2000, I was a rising star at IBM Storage Systems Division. I was three years out of college, garnered top performance reviews, aggressive in hitting deadlines, and known as a go-getter throughout the IT office.

I worked as an SAP analyst supporting orders and returns. During this time period, IBM desktop hard disk drives failed at an unusually high rate and subsequently, had a correspondingly high rate of returns. Our reverse supply chain was inundated with return requests and we had many problems keeping up with the volume. Not surprisingly, customer satisfaction plummeted.

After a grueling two-day cross-functional workshop to brainstorm solutions, I was selected as one of the leads to coordinate follow-up on all the workshop action items across departments. I set up a meeting with all the relevant parties from each group. I had a carefully planned agenda and was excited to lead this effort in hopes of increasing my visibility.

There were twenty or so people from five departments gathered for the follow-up session. The RMA manager arrived late, did not sit down, and immediately hijacked my agenda by going on a rant. She went on about how awful our warranty process was, how nobody worked together, and how upper management did not listen.

At one point she was yelling at me.

My memory of the rest of the meeting is hazy. I vaguely recall how members of other departments chimed in and the ranting snowballed. All kinds of finger-pointing ensued. It was chaotic but I already knew my meeting was done for during the RMA manager’s outburst.

I sat there in shock. I had no idea what to say. My plan had not survived contact with the enemy. My delusions of grandeur had been shattered. I felt powerless - like I was slowly drowning as I watched water come up to my neck and then cover my face. I remember adjourning the session by fumbling over some explanation. Weeks later, I overhead the director of the warranty group comment that whoever led that meeting was a failure. It just added more salt to the wound. It was humiliating.

For the last seventeen years, I've reflected back on that meeting often. It still haunts me but that’s not the main reason for the introspection.

I wish I could do that meeting over again.

I harbor no illusion any effort of mine would have made a difference in improving the warranty business process. That thing was so broken. Handling that meeting had nothing to do with domain-specific knowledge or hard skills. It had everything to do with handling an emotional person and my own emotional response to that person. It was a test of emotional intelligence (EQ).

What I’m certain of is this: That meeting would have turned out radically different with how I’ve grown in EQ since that day.

Daniel Goleman’s seminal text, Emotional Intelligence, defines EQ as the ability to recognize and manage one’s own and others’ emotions.

Many view emotional intelligence as an innate function of extraversion, charisma, and physical appearance. The common stereotype is EQ, much like IQ, is largely fixed and does not change much.

This is a myth. Temperament may be inherited but no one is born with an innate sense of how to get along well with others. Everyone learns emotional intelligence. No one is a “natural”. Children pick up on social cues at an early age. Some will pick up social cues faster due to greater exposure and receptivity. Skilled children will learn how to manage their emotions in a way to get what they want from their parents - attention, food, sympathy, device time, etc. but everyone learns.

Fear is likely the greatest inhibitor to learning emotional intelligence. Fear of rejection, shame, and failure are huge de-motivators. And yet humiliation is a great teacher because it is a type of stress. Lifting weights puts stress on your muscles, causing them to tear and setting off a repair process that strengthens them. Likewise, the act of putting yourself in socially stressful situations and recognizing and managing your emotions in the moment is EQ training. The tears you incur can trigger a repair process that strengthen your ability to handle emotions.

And there’s additional opportunity physical training does not have: Because it’s a social situation, it’s also an invitation to recognize and manage other people’s emotions. People can avoid strength training because their jobs don’t require it but I know very few people whose jobs don’t require them to interact with people. And therein lies the rub: It’s challenging to tell in the moment if you’re improving in getting along with other people. But over the long-run, through feedback from trusted friends and ruthless introspection, the impact will be quite noticeable.

The lesson of humiliation depends on one's attitude. Most people who experience humiliation tend to avoid situations where they risk it happening again. And yet it’s vital we continue to intentionally put ourselves in situations where we risk humiliation because it’s such a great teacher. Those situations are where we grow the most. You can only learn by making mistakes and it’s all practice.

The key is being able to face the fear. The prerequisite of managing others’ emotions is recognizing and managing my own. I love being a Christian because faith in Jesus is foundational to emotional health. Emotional maturity is synonymous with spiritual maturity.

If I could do that meeting over again, I would have picked strategic points to interrupt the RMA manager’s rant - allowing her just enough time to get her point across. I would paraphrase what she was saying and attempt to verbalize her emotion and underlying values. It might sound something like this “You’ve had to deal with this problem every day for the past two years and it’s only getting worse. Is that right?” and "You’re frustrated because you value teamwork, conscientiousness, and efficiency and none of that is happening.” I would pause to allow her to respond. I would gauge whether she was calming down. I might propose we each go around by department and identify our biggest pain points. Again, none of those things would have helped the warranty process but each person would have left the meeting with a different attitude. Every time I reflect on this meeting, I imagine tweaking my approach based on a new lesson I’ve learned.

It’s been almost a year now in my new pastoral role. On a regular basis, I’m faced with leadership and pastoral counseling situations I’ve never faced before. It’s exciting and scary but I love it. In some of these stressful meetings, I feel the panic rising in my throat just as did at that warranty meeting in 2000. Those are great opportunities to invite God to be actively present in me. One thing that helps relax me is to appreciate the moment. Because in time, I will learn from it and be better prepared in the future to respond.

At the end of Emotional Intelligence, Goleman decides the best way to describe EQ is something we’ve long been aware of: character.