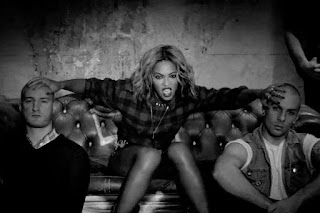 I love DJ Khaled’s "I’m the One". The pop saccharine tune with a chorus of big names (Justin Bieber, Quavo, Chance, and Lil’ Wayne) is simple, catchy, has a great rhythm, and an obvious meaning. Bieber croons:

And there’s a very succinct boast from Quavo:

I make your dreams come true when you wake up

Male ballads have been around since like forever. I’m sure there was some caveman who was trying to woo his prospective wife by making up a song and came up with the male ballad. Evolutionary psychology would say the male ballad came from a male's biological imperative to woo a prospective mate. And as far as I can tell, the premise of the male ballad hasn’t changed for millennia. The formula goes roughly like this: ‘I’m awesome. Here’s why I’m awesomer than other dudes. Have I told you how I’m awesome?"

On the other hand, feminist anthems are a relatively recent cultural phenomenon. They reject the biological imperative. Here are the opening lines of Maggie Lindemann’s “Pretty Girl” (the Cheat Codes X CADE Remix version is quite danceable):

I can swear, I can joke
I can say what’s on my mind
If I drink, if I smoke
I keep up with the guys
And you see me holding up my middle finger to the world
**** your ribbons and your pearls
‘Cause I’m not just a pretty girl

In Exhibit A above, Lindemann asserts her right to engage in presumably male-exclusive activities such as swearing, joking, saying what’s on one’s mind, drinking, and smoking. She then offers us a profane gesture to indicate her violent dissatisfaction with our society's emphasis on a woman’s appearance. Next is Exhibit B from Daya’s "Sit Still, Look Pretty” [see note below]:

First, there’s a dig against other women who chase materialism and unwittingly subjugate themselves to men. With this comment Lindemann indicates how she is different from other women, a remark appropriately positioned under the umbrella of female braggadocio. Then there’s the second person reference to a man as she asserts her independence apart from him. Further along, there’s this doozy:

Not only does Daya not need a king but the king is a tyrant who enslaves women. Finally, Exhibit C is the uber-popular feminist diva, Beyonce. In “Flawless”, she samples an excerpt from African novelist Chimamanda Ngozi Adichie’s TED talk “We should all be feminists” - here’s a couple lines that stood out to me:

We teach girls that they cannot be sexual beings in the way that boys are
Feminist: the person who believes in the social, political, and economic equality of the sexes

Men are often stereotyped as angry and violent but what’s curious is the male ballad is generally devoid of anger and violence whereas the feminist anthem typically has both in spades. Both types of songs say “I’m perfect” but in completely different ways.

The feminist anthem says in a conflicted, angry way: "Don’t define me by my appearance and relationships. I’m perfect no matter what you say.  And I will keep telling you to stop telling me how I’m not perfect. And the problem with the world is you fail to see how I’m perfect."

The male ballad is simpler and more idealistic: "I am defined by my effectiveness and I am optimally effective. Therefore, I’m perfect by any and every conceivable measure. It doesn’t actually enter my mind that I’m not perfect. There is no problem in the world that my perfection cannot solve.”

The male ballad is affirmation through bombast. It says I’m the epitome of the stereotype. The male ballad says I fully embrace the stereotype and I exceed its expectations. In fact, as a result of this song, there will even be new stereotypes invented because I am the template by which all other men are ensured. The arrogance is off the charts in these songs. Women dig this because arrogance and confidence are highly correlated and confidence is attractive.

The feminist anthem attempts to emulate the male ballad but it’s a strange imitation. The anger and violence betray an embedded inferiority complex in the narrative. Feminist anthems are also peculiar in that they want to deny the stereotype while still conforming to it. I don’t want to be JUST a pretty girl. Which means I want to be want to be physically attractive in conventional ways but unconventional in also possessing the socially acceptable and positive male traits. In a male ballad, a guy is explicit about his desire. In a feminist anthem, the woman is also explicit about her desire but gets angry about the expectations around her desire.

In light of all this, one thing I appreciate about Beyonce’s feminism is that she gets male braggadocio. Because the male ballad is utterly pompous, she turns her feminism up to 11 in precisely the same way (“Who runs the world? Girls!”) And what’s revealing about the differences between about men and women is how each gender responds to her work. Women will ponder and evaluate Beyonce's feminist intentions whereas men think “Wow, her body is awesome”.

The feminist anthem can learn from the male ballad and be more like Beyonce by making conceited and grandiose claims without qualification. The feminist anthem can subtract the internal conflict and contradiction and inject more simplicity, delusion, arrogance, and self-promotion. Lines could look like this:

There’s not much lyrical complexity here and this is virtually indistinguishable from a male ballad; which I believe is precisely the point.

By contrast, male ballads should evolve to become more realistic, humble, and conflicted. In light of this, Pitbull could write a song called “Bald Guy”. Lines might include:

People talk about how I’m bald
Stop talking about the lack of hair on my head
I can be sensitive, gentle, and vigorous even though my noggin is bare
I’m not just a bald guy; I’m much more than this
Don’t stereotype me because I’m follicularly challenged

I’m confident this song would sell like crazy. It would also be pretty sweet to have a male ballad where a guy exhibits greater honesty and vulnerability. DJ Khaled would come out with another song called “I’m One of Many”. Lines would include:

Yeah, I kinda dig you
Most of the time
I'm ahead of the curve in some things
But middling to below average in other areas
I’m one of many, one of many, yeah

If you’re a woman, I know reading these lyrics just sent a tingle down your spine. I can’t believe record producers have yet to discover this winning formula. Maybe they know something we don’t.

I appreciate feminism’s original intent of leveling the playing field between men and women. The fact our culture has shifted to promote greater rights for women is an important milestone. And yet some of feminism’s excesses scare me. I often sense feminism, in its effort to fight misogyny, ultimately seeks to erase all gender differences so the benchmark of equality is that women must become like men and men like women.

Note: When did it become a thing to title a song that is the opposite of what the song is about? Daya’s “Still Still, Look Pretty” is about NOT sitting still and looking pretty. And Maddie Lindeman’s “Pretty Girl” is about NOT being a pretty girl, it’s about being more than JUST a pretty girl. That is disingenuous labeling. I, will however, still listen to, critique, and dance to their music.