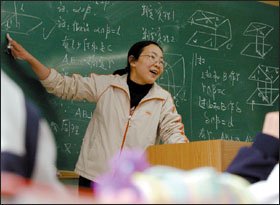 Confirmation bias and cognitive dissonance about Asians being better at math

Few topics stir up more debate than the discussion of ethnic differences in cognitive ability. One of my favorite books, The Bell Curve, has been and in the past year has become again a lightning rod of controversy. The book and its ideas are arguably more relevant today than when it was first published twenty-five years ago. The co-author, Charles Murray, has been labeled a white supremacist and his recent speaking engagements have been subject to violent protest at Middlebury College and my alma mater, UC Berkeley.

I listened to Murray on Sam Harris’ podcast recently and he published the following summary from The Bell Curve in response to listener interest. Below is an excerpt of the chapter summary on Asian ethnic differences in cognitive ability:

East Asians (e.g., Chinese, Japanese), whether in America or in Asia, typically earn higher scores on intelligence and achievement tests than white Americans. The precise size of their advantage is unclear; estimates range from just a few to ten points. A more certain difference between the races is that East Asians have higher nonverbal intelligence than whites while being equal, or perhaps slightly lower, in verbal intelligence.

1) A fact is a description of an observable reality: Is it really controversial there’s truth to the stereotype that Asians are good at math? When I visit Yahoo, Apple, and Google and observe masses of Asian employees, am I surprised that many of them excel in visual-spatial intelligence? The observable difference at a group level does not mean Asians that are bad at math don’t exist. Rather it means there are fewer math-challenged Asians compared with other ethnic groups. It also does not mean all Asian subgroups excel at math. After all, many institutions, including the military and higher education, employ IQ testing to determine admission and role/major. Their continued reliance on standardized testing indicates IQ can be measured accurately enough to draw meaningful conclusions. IQ tests are not infallible but they do indicate something important.

2) Neither confirmation bias nor cognitive dissonance can erase facts: People who have never read The Bell Curve say the book has been debunked. When I probe further what this means, it means they’ve heard the authors are racist and that genetics cannot explain the ethnic differences in cognitive ability. That is not the argument of the book. The authors argue that intelligence is a real thing that can be measured accurately, makes a huge difference in life outcomes (even after addressing for confounding factors), and has an increasingly significant role in segregating America - hence the “bubble effect” or what the authors term "cognitive stratification”.

Confirmation bias means our presuppositions will alter our perception of a fact. Confirmation bias and cognitive dissonance make it difficult to accept realities that run counter to our experience or ideological commitments. That’s why in 6th century BC, the idea of a spherical earth was controversial. In light of this, I recognize having spent most of my adult life in Silicon Valley, that I am prone to confirmation bias when it comes to observing Asian intelligence differences. I live in a bubble. At the same time, I am qualified to observe what is true inside the bubble.

Cognitive dissonance is the tendency to seek consistency in one’s beliefs and opinions and where there is inconsistency (dissonance) exists to seek to eliminate it. If one has the belief that every person is equal, regardless of ethnic group, and that understanding of equality includes sameness in cognitive ability then the demonstrated IQ gap between ethnic groups is going to cause some serious tension. Resolving that tension is cognitive dissonance and what leads people to re-interpret facts in order them to be consistent with their stated beliefs.

As competent social scientists aware of the pitfalls of confirmation bias and cognitive dissonance, Murray and Herrnstein undertook an enormous amount of statistical research on the topic of intelligence. Their work, thoroughly critiqued and subject to peer review, has stood the test of time. Their original thesis is still intact after twenty-five years. And their thesis is this: They predicted our country’s efficiency in sorting people vocationally based on cognitive ability would lead to increasing class segregation. It’s difficult to argue against this. One can argue with the methodology (as many have) and temper their findings but that doesn’t erase the findings themselves.

3) Facts are the basis for dialogue: When the Apostle Paul speaks at the Areopagus and observes the alar with an inscription “To the unknown god”, he is commenting on a fact. This description is the basis of his dialogue with the men of Athens. Without the fact of the description, Paul does not have a connection with their religion. If one cannot make observations about facts - a shared understanding of reality - as a starting point of conversation, then dialogue breaks down.

I read The Bell Curve a couple years and found its argument fascinating. Like the bible, one can read the text and draw conclusions on its meaning based entirely on one's presuppositions. If you want to cherry pick their arguments and see him as white supremacist, you certainly have enough evidence to do so. However, in doing so, you will miss the author’s intended meaning. If you value intellectual honesty and dialogue, then it should be important for you to understand an author’s intended meaning. It is the basis of communication and relationship.

Therefore, it’s important to understand what Murray is saying (and not saying) and why. The significant cognitive differences between blacks and whites have occupied most of popular attention. I focus on the cognitive differences between whites and Asians because it’s often overshadowed by the black-white IQ gap (about one standard deviation). That fact of this difference is a basis for dialogue about affirmative action, workplace discrimination, and vocational choices.

4) Facts, by themselves, are value-neutral: Some would argue, rightly, that the way facts are presented makes a huge difference. It is in HOW they are presented that indicates one's values. To respond to #blacklivesmatter and say #alllivesmatter is a unhelpful fact because it obscures the purpose of the movement. So how is studying facts about ethnic differences in cognitive ability valuable?

The fact of higher average Asian intelligence as a group can be an argument for discrimination. Asian Americans are under-represented at top levels of management and one could argue that is not proportional based on our group’s average intelligence.

There’s also the fact that although IQ may be the single greatest predictor of financial success, at the elite level, other factors come into play. I read a metaphor that equated IQ as a criteria for corporate success with weight for an NFL offensive lineman. You won’t bother trying to protect an NFL quarterback unless you weigh at least 300 lbs. but just because you’re 500 lbs. doesn’t make you an All-Pro. In other words, there’s a minimum threshold of intelligence to be an executive but the highest levels require other characteristics besides strong visual-spatial intelligence.

Lastly, ethnic differences in cognitive ability can lead to a greater appreciation for the “valued place”. This means helping shape a society that creates and values vocations for people with many different levels of cognitive ability. It may mean requiring less government intervention to force certain sectors to have better representation of ethnic groups, as Murray suggests.

My hope in this discussion is to pursue truth by overcoming confirmation bias and cognitive dissonance. If we can agree on the facts and their importance, we can have a meaningful discussion and get closer to what is both true and helpful.