The Otherness of Being Asian American 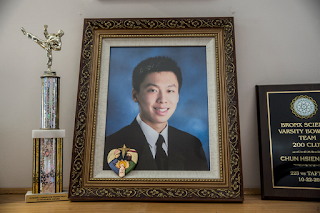 Jay Caspian Kang’s insightful NY Times article got me thinking about Asian American identity and masculinity. At first glance, this piece about 20-year old Michael Deng’s death during a weekend fraternity getaway seems to be an expose on the excesses of fraternity hazing. That’s absolutely not what it’s about - as the title should indicate but the majority of commenters seems to miss.
Through the lens of an Asian American fraternity’s initiation ritual, Kang highlights the challenges of defining an Asian American identity. The article concerns the trial of four of Deng’s fraternity brothers for their involvement in the death of Deng. Ultimately, Kang’s article is not so much about ethnicity but a man’s hunger for belonging and the male need to define and express their identity through aggression.

I didn’t realize I was Asian American until I moved to Atlanta in eighth grade. Before that, I was certain I was Chinese. In San Jose, I had lots of Chinese, Korean, and Japanese friends.  We lived in the same affluent neighborhoods, were in the same accelerated classes, and had parents who worked for the same high-tech companies. We were plentiful. Despite the same immigrant emphasis on achievement, we were able to distinguish between Asian sub-groups. We didn’t think about being Asian American until high school. At lunch time, we sat next to a low brick wall near the library. I later discovered my non-Asian classmates referred to the location as “The Great Wall”.

The marker of Asian American-ness is superficial. It means physical appearance distinguishes you. These physical features include but are not limited to: elongated eyes, skin tone ranging from yellow tan to dark brown, black hair, brown eyes, slight frame, flatter face, shallow set eye sockets, and so forth. Case in point: In the article, Kang mentions how he was followed by a cameraman who thought he was on trial. Kang is of Korean descent. The defendants are Chinese.

Asian American is a political and social category. To be woke is to be aware of racism and social justice. The Asian American experience is too varied to have any specific cultural meaning. Kang acknowledges this:

My Korean upbringing, I’ve found, has more in common with that of the children of Jewish and West African immigrants than that of the Chinese and Japanese in the United States - with whom I share only the anxiety that if one of us is put against the wall, the other will most likely be standing next to him.

Being Asian American means baptism into a shared history and experience of discrimination. It is an immersion into mutual suffering. It means being the other. It’s probably best exemplified by Vincent Chin, who was beaten to death in 1982 because he was a Chinese immigrant mistaken for a Japanese citizen. His mistake was living in a Detroit suburb during a time of fierce competition from Japanese automakers. Likewise, the most blatant forms of racism I’ve experienced are mistaken identity - I’ve been called a “Jap” or someone makes fake Asian language noises “Ching Chong” or when people greet me with “Konichiwa”.

The problem with identifying as Asian American is the label forces one to depart from his/her tribal, cultural and national affiliation and enter into a political one. That’s not a journey most Asian Americans are interested in taking. There is little chance a recent mainland Chinese immigrant would describe himself as “Asian American”. You have to be told you’re Asian American, have some experience with discrimination, and lastly, identify as American.

There are three reasons why it’s difficult to convince Chinese people of our Asian American-ness. First, it’s not a profound distinction. It’s based on physical differences that separate us from the majority population of the United States. It doesn’t feel like a meaningful distinction.

Second, if you live in an area where Asians are plentiful like Silicon Valley, you will sub-divide based on country of origin and with the social value of being Asian, you will not have a daily experience with otherness. You won’t have first-hand experience of discrimination. In an area with a critical mass of Asians, we’re far more concerned with specific tribal distinctions. For Chinese, this is sorted by when you or your parents/ancestors came to this country and from where - mainland China, Taiwan, or Hong Kong etc. Those cultural differences don’t seem significant but they are every bit as valid as being from a small town in the South or Brooklyn. If you work and go to school with a critical mass of Asians, these tribal distinctions are meaningful.

Third, America is a far more meritocratic society than most if not all of Asia. I was talking with a friend from India. He often has trouble understanding what assimilated Asian Americans complain about. Even when he does experience subtle discrimination here, it’s still far better than the corruption, ineptitude, and systemic and overt discrimination within the Indian government and society. In the US, the model minority stereotype is a stunted privilege but a privilege nonetheless. We hear about it. We benefit from it. We reinforce it. We may complain about our suffering here but relative to what our immigrant peers suffered in their homelands, they may beg to differ. Because of the honor-shame culture, immigrants from India (caste) and China (social hierarchy) can experience more otherness in their home country than in the US. Otherness is a nominal fee for the privilege of living in America.

The modern Asian-American fraternity was born out of the protests of the ‘80s and the growing alienation that Asian-Americans felt on campus. . . The messages from the fraternities and sororities are remarkably similar - unity to achieve unexpected success, brotherhood and sisterhood devoted to establishing a professional network of high-functioning alumni. Initiations tend to promote a vague vision of Pan-Asian identity that reflects the history of Asian-American scholarship and activism, but whose urgency has been hollowed out by years of apathy.

The problem with shared suffering is it does not have an implicit trajectory. The Asian American Greek system negotiates otherness through success in conventional terms - social status and wealth. It’s not surprising the urgency rings hollow because it’s a shallow means of minimizing otherness. An Asian American can find worldly success but still find himself an outsider. And as a Christian, I have conflicting desires: On one hand, I want to eradicate discrimination because I see my otherness through the lens of social justice. On the other hand, I’m grateful for my otherness because it means I'm an exile. It means I can access compassion on fellow exiles as well as join Christ in the fellowship of his suffering and alienation.

I’m thankful to Kang for his nuanced portrait of the challenges in pinning down an Asian American identity. It speaks to the diversity of our experience and our collective otherness, which ultimately, is navigated through as many different paths as our numerous villages of ancestral origin.