Stop arguing with yourself and enjoy God's presence 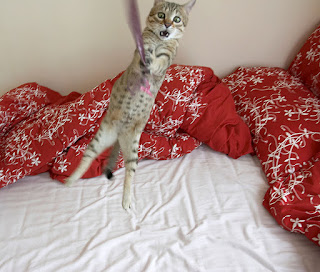 God is big. However, in line with his gracious nature, he doesn’t always speak loudly, and hearing his voice can be difficult when I’m in the midst of fighting with myself. I have many voices going on in my head: the snarky contrarian, the positive Christian idealist, the relentless egomaniac, the compassionate shepherd, the curious adventurer, and more.

But often the loudest voice is the inner moral critic. He’s a yeller.

When I start to listen to some unhealthy streams - say the egomaniac's pining for public affirmation or the curious adventurer’s lust for exploration - and lose focus from whatever I was supposed to be doing, I stop myself, become aware of my wayward thoughts, and the shouts of the inner moral critic begin to escalate. The argument goes something like this:

Curious Adventurer [watching Youtube cat fail videos]: Oh my gosh. Either these cats are really dumb or they’re totally being set up by their owners. I need to research this more.

Compassionate Shepherd: Do cats go to heaven? Is there a Cat Jesus?

Moral Critic: Did you seriously just waste 15 minutes watching Youtube videos and rationalize it as sermon research? Are you kidding me? Are you 10 years old? (Elliot loves fail videos)

The demands of the inner critic generate tensions that I alleviate by further indulging my curious adventurer persona. And so the vicious cycle of guilt, shame, and condemnation spirals downward.

And yet recently I’ve started to recall some helpful words from Brother Lawrence that I’m realizing are the essence of the gospel. I read his little book, Practicing the Presence of God, when I was in college. My brother recommended the book to me while he attended a Campus Crusade for Christ (now Cru) summer missions project in Yellowstone National Park. He cleaned hotel rooms and it was mind-numbing work. The book helped him sustain a conversation with God amidst the mundane routine. Here are Brother Lawrence’s words in the third person:

"When he had not thought of God for a good while, he did not punish himself for it.  But after having acknowledged his failing, he returned to Him with much greater trust."

Brother Lawrence doesn’t mention gratitude but it’s evident in the quote. He is thankful God is always present to commune with. Even when our minds stray from his presence, it doesn’t mean he has left. He eagerly waits for us to notice him and come back. And when we return, he delights in our small but significant repentance.

I suspect many people are not that different from me. You may not experience full-blown internal fights but I suspect many Christians struggle to decide which internal voice to listen to. And unfortunately, we often perceive the voice of the moral critic to be the voice of the Spirit. However, the scriptures teach that the Spirit leads believers into truth and not condemnation (John 3:17-18; John 16:8-13; Romans 8:1). It’s a crucial distortion of the gospel to believe that God’s dearly loved children are constantly being judged and condemned.

Today, I’m learning to allow the voice of the compassionate shepherd to gently calm my temperamental inner critic. I’m learning to consider the shepherd’s voice as the prompting of the Holy Spirit. The conversation might continue like this:

Moral Critic: Did you seriously just waste 15 minutes watching Youtube videos and rationalize it as sermon research? Are you kidding me? Are you 10 years old? (Elliot loves fail videos)

Compassionate Shepherd: Well, you learned something about cats. Elliot would certainly approve. He has your curiosity, and it is such a gift. At any time, you can return to the task at hand. You are wonderfully accepted and God is excited about you.