Humanity and Work in Andrew Yang's War on Normal People 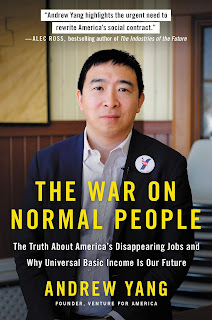 I’m not sure if I’m on the #YangGang bandwagon yet but I’m certainly intrigued. Yang is funny and self-deprecating. His humor is evident throughout his book “The War on Normal People” with lines like “This was back when people dated in college” and his mom’s endorsement of universal basic income (UBI). My favorite chapter is the first, titled “My Journey”. I love how he tells his growing up story in a couple pages and I resonated with his stories of being bullied with ethnic slurs. I couldn’t relate to his entrepreneurial success but admired how he “had gone from being an underdog to one of the guys with the answers, from finding the most marginalized or excluded person in the room to finding the richest person and making him or her feel special” (pg. 9). I love how he visited various cities - Detroit, Cleveland, and Pittsburgh among many - and personally witnessed the hollowing out of the middle class. These rapidly increasing negative effects on America’s cities, Yang calls the Great Displacement.

That’s what Part I of Yang’s book is about: how automation will replace many clerical, transportation, and even many white collar jobs over the next 10-15 years. He starts by defining “normal”. If you’re reading this, you’re probably not normal. Normal is a person with some college education, a personal annual income of around $32K, and almost no savings. That’s the median of America. And artificial intelligence (AI) is replacing the routine tasks most normal people are currently paid to do. AI is capable of performing a broad range of routinized tasks and that list is growing each day. Automated cashiers at McDonald’s is one example. Yang devotes the bulk of chapter 5 to trucking. As my #yanggang friend loves to remind me, truck driving is the most popular occupation in 29 states and self-driving trucks, which Tesla has tremendous progress on, will displace many truck drivers. However, if you look more carefully at the statistics, the problem with the Bureau of Labor Statistics data is truck, delivery, and tractor drivers are lumped into one category. Additionally, my understanding of a friend’s truck driving job is a major portion of his responsibilities include the loading and unloading of the heavy equipment he hauls around. There’s a lot of problem-solving for which AI is currently nowhere near addressing. Lastly, as convoys of self-driving trucks take the road, human drivers/operators will still be needed to oversee the journey, troubleshoot system problems, and be stationed at off-ramps/urban areas for refuel, maintenance, and the final leg to destination. But Yang’s point is still compelling. My contention is a matter of timing and degree and the debate isn’t whether AI will replace these jobs but how soon. The timing is important though as the lead time for the transformation offers a window for displaced workers to respond. And yet I believe Yang is right in that many workers today will be unable to start over; that is, move to a new city, learn new skills, and compete with the young and better educated for jobs.

Part II of Yang’s book is a nod to Charles Murray. Much of these chapters draws on Murray’s work and ideas. This section is startlingly similar to Murray's Coming Apart: The State of White America 1960-2010. And of course, Murray has also been a fervent champion of Universal Basic Income (UBI) for decades. However, Murray's proposal pays for UBI by cutting all welfare programs rather than the value-added tax (VAT) that Yang proposes. Murray’s Coming Apart is powerful because it sorts real people based on statistical data into two fictitious towns, Belmont (upper class - comparable to Los Gatos, Saratoga, Los Altos, Palo Alto, etc.) with Fishtown (lower class - comparable to Stockton, Salinas, West Oakland, and Bakersfield).

Check out the similarity in chapter titles between the two books:  Part II in Yang’s book includes these titles: Life in the Bubble, The Permanent Shadow Class (examples: opioid epidemic and disability benefits), Men, Women, and Children (example: skyrocketing rate of out-of-wedlock childbirth), The Shape We’re In/Disintegration vs. Murray’s Coming Apart: sections titled Formation of a New Upper Class and Formation of a New Lower Class; with a chapter titled: How Thick is Your Bubble (along with a bubble quiz that went viral), and chapters on the disintegration of the lower class in marriage, industriousness, and honesty. I’m not surprised Yang doesn’t mention Murray at all as Murray is a libertarian and writes for a conservative think tank. In this I find Yang tremendously appealing - his approach is bi-partisan, practical, and consistent with his slogan of Make America Think Harder (MATH). Lastly, one highly readable and personal account of the hollowing of the white middle class is J.D. Vance’s Hillbilly Elegy, which Yang quotes from.

Part III was the hardest for me. The bulk of it is devoted to explaining UBI. Yang’s proposal is the US government would give $1000 monthly to adults aged 18-64. Receiving this “Freedom Dividend” would mean forgoing other welfare payments like disability. I did not find the celebrity endorsements of UBI compelling. For example, Bill Gates says “A problem of excess [automation] forces us to look at the individuals affected and take those extra resources and make sure they’re directed to them in terms of re-education and income policies”. This statement agrees with Yang on the problem but falls way short of affirming UBI. There’s a quote about how the government doesn’t do many things well but mailing people checks is one thing it excels at. I would agree with that. The premise of UBI is putting money in people’s hands gives them the freedom to decide how to best spend it. It is based a trust in people to make good choices. Yang suggests prospective entrepreneurs might have greater courage if they had a cushion of $12,000 a year. He has a chapter on Digital Social Credits, where people earn points for doing altruistic tasks (i.e. fixing someone’s fence) and then use the currency to purchase goods and services. I was repulsed. It seems like #virtuesignaling on steroids. This would be social media at its absolute worst.

The chapter that disturbed me most is titled Humanity and Work. It’s only 6 pages but the theology of work is vital to me as a pastor. Yang argues getting humans to work is a pain in the rear. We complain, are unreliable and dishonest, have bad days, call in sick, need training, etc. We avoid work but we know we have to do it. Yang wrestles with the implications of robots as far superior workers than humans. The closing line is this: “The challenge we must overcome is that humans need work more than work need us.” There’s something profoundly biblical about this statement. God designed humanity to labor and cultivate Eden. But the ground - representing man’s labor - was cursed because of Adam’s sin. Work will always be a pain for us and yet we were designed for it. Decoupling income from work, as Yang proposes, has considerable risk. My hope is that, regardless of who attains presidential office, the church would empower normal people to have a valued place. A valued place is an esteemed role within a community that contributes to others’ needs. For example, many grandparents have a valued place in a family by helping raise grandchildren though they don’t earn a penny. In the years to come, this type of service, whether tied to wages or not, may become the new definition of work. But for me, it’s not an option to get rid of it.