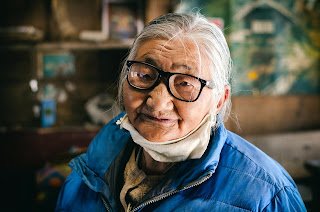 Mark 1:40-41 And a leper came to him,
imploring him, and kneeling said to him, If you will, you can make me clean. 41 Moved with pity, he stretched out his hand and touched him and said to him, I will; be clean.

I sat in a McDonald’s hours before the governor of California announced a shelter-in-place directive for Santa Clara County residents. Social distancing was already in full effect - every other table had a sign “DO NOT SIT”. The
McDonald’s near my home has two rooms - a main dining room where the counters and drink station are, and a side dining area where the restrooms are located. An older Asian woman sat fifteen feet away from me at a table. I heard her begin to cough. Once she started coughing, a person sitting in the room immediately got up and left. Another customer walked in and abruptly turned around.

If the devil wanted to devise a scheme to further create division and alienation, he would concoct a novel illness that would not kill the healthy but rather disproportionately attack the vulnerable, neglected and discriminated against: the foreigner (or those stereotyped to be), the elderly, those with pre-existing medical conditions, and the poor. And the centerpiece of his strategy and where most of his work would be involved, would be deployment of a massive disinformation campaign to strike fear in people’s hearts and worsen existing areas of division. Incidents of racism and xenophobia would proliferate. The gap between the haves and have-nots would increase.

He would take advantage of social media and bombard people with messaging about the spread. The messages would be categorized as data analysis and public health experts would extrapolate infection and fatality rates and make forecasts of doom such as the likelihood of overwhelming a country’s healthcare system. There would be graphics and diagrams to illustrate the spread. Their stated purpose would be informative but their true purpose would be to sow fear. The enemy would make it even socially acceptable for people to isolate themselves from the most vulnerable by re-appropriating language of exclusion as “social distancing” and “quarantine”. He would create a stigma to the disease that was just as dangerous as the disease itself.

But the master stroke of the enemy’s campaign would be his attack on how people love one another.

He would poison touch.

He would alter the most basic of social conventions: the touch greeting - whether a handshake, kiss on the cheek, high-five, or fist bump. Families and communities express love through physical affection and Satan will taint this medium. He would stigmatize skin-on-skin contact for fear of infection. The enemy’s campaign would outlaw hugs. He would stigmatize the practice of Christians placing hands on another’s shoulder in prayer. He will cause a disfiguring or change in appearance of those infected - either a disfiguring of facial features or the wearing of a mask. Communities would be defined by boundaries of who could be touched and who could not. Those who are perceived as diseased will experience the death of touch.

These boundaries of touch would create communities of untouchables. These communities, visible and geographic in times past, would be invisible to the public. These encampments, cloaked in the past, would fall completely off the radar. Their invisibility would make it more difficult to perceive and easier to imagine they did not exist. But those untouchables will live on in isolation and will slowly suffer and die from lack of touch.

Satan has used infectious diseases throughout history to alienate people. Leprosy was one of them. Even in just the past hundred years, little was understood about Hanson’s disease and how it was spread (95% of people are immune), and those infected were isolated into their own communities and viewed as unclean. There was also a term to describe those suffering from the disease: lepers. The touch of a leper was viewed as the touch of death. Lepers were restricted not only from human contact but even from sight. In the ancient near east, it was taught that lepers were sinners who brought the disease upon themselves. Leprosy also disproportionately affected the poor and neglected. The stigma to the disease was far more dangerous than the disease itself.

Jesus could and did heal without touch. And yet he intentionally touched those who were most untouchable. His healing touch had a discernible physical effect - to cure the bodily ailment. But the effect of his touch extended far beyond the physical: his touch testified to the worth of the person and was the medium by which supernatural power was conducted.

During this global pandemic, it is clear Christians must exercise wisdom and brotherly love by heeding the public health orders to shelter-in-place, practice good hygiene, and maintain social distance. Though these directives are temporary, I’m concerned about their residual impact. The body of Christ must be mindful of Satan’s schemes. There are ways to mitigate social distancing but I sense it will be an uphill battle.

How long does it take for touch to die? Weeks? Months?

What will it take to resurrect touch? Between friends and within one’s social circle, a little time and a little effort.

I pray this hiatus on touch would cause reflection on its importance and how the marginalized suffer most when touch dies. They’re the ones who are most deprived to begin with and when touch dies, they will die first.

What will it take to resurrect touch for the leper?

Am I the one filled with fear? In alienating others, am I the alienated one? How many of my justifications for helping others ring hollow and empty? In surrounding myself and my circle with a hedge of protection, have I walled myself off from the touch of Jesus? If Jesus, in the guise of a leper or an elderly Asian woman, stretched out her hand to me, would I recoil?

After she finished her meal, the older Asian woman stepped near my table to put her trash in the waste receptacle. I had to resist my impulse to recoil from her. Part of me desperately wanted to raise my hoodie over my mouth. I watched as her face drooped with fatigue and sadness. Part of me wanted to give her a hug. I don’t know which part was bigger.