Second culture is the wife 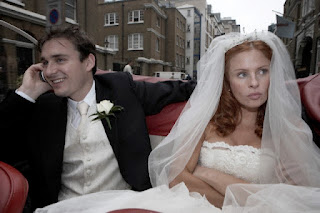 However the parent-child dynamic is not a metaphor. A metaphor compares two distinct entities whereas the parent-child dynamic describes a fundamental reality of immigrant churches. The children of the first generation make up the English-speaking congregation. Paternalism begins when the children of the immigrant congregation are born. As the kids grow, the paternalism hopefully fades. After a number of years, the Americanized congregation becomes less marginalized and matures into adult status.

The husband-wife relationship is both a paradigm and metaphor. But there is a real metaphor present. It is of husband and wife. The husband-wife relationship describes both the fallen and ideal dynamic between congregations in a multi-cultural church. In an unhealthy church, the first culture is the abusive husband who lords power over his much younger wife, the second culture. In a healthy immigrant/multicultural church living by "born-again" culture both husband and wife have equal status but complementary roles, working as team for the kingdom.

But biblically speaking, a husband does more than this. A husband focuses on the needs of his wife, he sacrifices himself on her behalf, and loves her as he loves himself. The picture is the first culture placing the second culture ahead of himself. This is a high calling - both in the church body and actual marriage.

Biblically speaking, a wife's role is to submit to her husband. She cannot act out of entitlement. Her husband is her head as Christ is the head of the church.

Second generation churches are planted because wives are ready to leave their husbands. At this point, the metaphor fails because new, culturally-specific churches are vital for the Great Commission. And one advantage of Asian American and other second generation churches is they allow the second culture to become the first (minority groups are often relegated to second culture in mainstream churches as well). Pastor Ken Fong writes how his Pan-Asian church was birthed out of a Japanese immigrant church. The first culture sacrificed its identity in order to allow the second to prosper and expand.

I wonder if many conflicts between first and second generation in immigrant churches could be resolved by fully embracing this marriage paradigm. Just as in marriage, both parties must change. Perhaps we have these conflicts because we don't see how marriage overlaps into important areas of life and because we have a low view of marriage.

Is born-again culture the key to a successful marriage? The founder of our church, Tom Chow, coined the term "born-again culture" to describe a spiritual perspective on culture that transcends any specific culture. In a healthy Chinese church in the , it is neither Chinese culture nor American culture that dominates. The first culture leads by submission and the second culture follows in submission. This is a healthy marriage paradigm. One small example of how Tom applied this is in bilingual services, he would speak in English and have it translated in Chinese. He put second culture first. Not always but sometimes. Our church has made great strides in putting second culture first. We serve Chinese food and pizza for lunch. Our leadership meetings are conducted in English. Our elder/minister meetings are relationally-oriented. There is no paternalism among decision-makers towards the second culture.

How to be a good husband: The Grecian Jews in the first century church were second culture (Acts 6:1-6). The Hebraic Jews were first. The Grecian widows were being overlooked in the distribution of food. The first culture ceded power to the second by appointing deacons. They sacrificed control in order to build up leadership. The first culture did this without neglecting their primary duty - prayer and ministry of the word.

That's what a good husband does. He focuses on his unique role and gives responsibility to his wife to support the overall ministry in her unique way. Acts 6:7 implies the expanded as a result of this successful marriage. Equal status but different roles. A good husband puts the needs of his wife first.

How to be a good wife: Proverbs 27:15 says "A quarrelsome wife is like a constant dripping on a rainy day." I'm a crappy wife. One of my greatest failures in ministry (and life) is being argumentative and difficult. It is so easy to give in to second culture complaining. I whine about being overlooked, protest being second-class, moan, and belly-ache. It is so easy to feel sorry for myself and sit around being the victim as an excuse not to change.

There are certain realities I need to submit to. As a second culture member, my role is to respect and submit to the authorities that have been placed in my life. As we do this willingly and joyfully, the will expand.

September 05, 2013
My brother got me David Epstein's book The Sports Gene . It is a fascinating quick read. If you're interested in sports and science, it will enthrall you.  I finished it in three days. Epstein's point is that far more of an athlete's performance is due to genetics than due to the so-called "10,000 hour" rule promulgated by books such as Outliers by Malcolm Gladwell and Talent is Overrated by Geoff Colvin (both which are very good). The 10,000 hour rule states that any person can reach expert level of performance in a sport if they devote 10,000 hours of deliberate and intentional practice.  That's a lot of hours. Most people aren't capable of anywhere close. And that's precisely Epstein's point. Someone who devotes 10,000 hours of sport-specific practice is likely genetically gifted for the sport in extraordinary ways AND genetically gifted in their ability to persevere and benefit from practice. Therefore, a person who can pra
5 comments
Read more