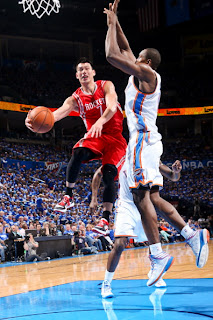 According to one source, Jeremy Lin is an average point guard in the National Basketball Association. His season stats are pretty good but not All-Star caliber. His scoring is down slightly from last season because he has a different team and a different role.

To be average in an elite cadre of 500 of the best basketball players and top athletes in the world is nothing short of extraordinary.

For overachieving Asian Americans, being average is garbage. Getting a "C" is failure. Getting a "satisfactory" is humiliating. Most of us won't attempt anything where we can only "get by". But the reality is there has never been an average Asian American NBA player.

Yao Ming is exceptional both in ability but also in height. Being 7'6" does not make you normal. His talent was cultivated at an early age in Chinese government sports schools. He's also not American.

Wat Misaka was the first Asian American to play in the NBA in 1947. He played in three games. That's barely a blip on the radar.

The fact that Jeremy has made it as an ordinary NBA player tells you how extraordinary his story is. But the beauty of it is that his success is becoming normal. Ordinary even.

When something becomes normal, it becomes commonplace. It's an accepted part of reality. You almost take it for granted.

That's what I always wanted - when an Asian American male can be "average" in an area where his presence up to that point was utterly non-existent. It means it's not a big deal but not a small deal either.

And that's the paradoxical nature of his success. On one hand, I want to celebrate his every achievement as the greatest thing in the world. On the other hand, I want to downplay his popularity and say, "Oh yeah, that's just how Asian guys roll. It's just whatever". As if Asian Americans playing in the NBA aren't that special. As if I'm accustomed to seeing unicorns everyday.

In a recent article, Jeremy decried how polarized people's view of him is:

"It seems like everybody’s perception of me is very bipolar, To one group, it’s overpaid, overrated; to another group, it’s underpaid, underrated, underdog. It’s funny to me because there’s no real balance. Why can’t I just be a young player who’s shown some potential and has a lot of learning to do?”

I went to a Warriors-Rockets game where I sat next to some vocal Warriors fans who heckled Jeremy whenever he got the ball. "He can't shoot" they cried. I was offended that there was some kind of racial innuendo in their remarks. But my sensitivity evaporated when I realized they were heckling all of the Rocket's players. They were treating him like an ordinary NBA player.


In response to Jeremy's comment, I might tell him that it's quite normal to want to be treated like an ordinary NBA player even if you're anything but.