The Sound of Two Cultures Clapping 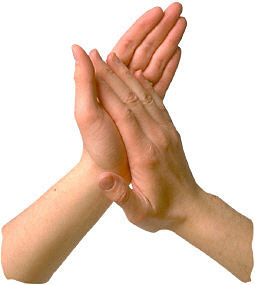 I was in the United Kingdom for a conference last week. The topic was how our individual spirituality interacts with church life. About half the participants were Westerners (Brazilians, American or British-born/raised citizens) and the other half were Asians born in China, Taiwan, South Korea, Indonesia, and Malaysia. Our times of singing were great but one thing drove me crazy.

We couldn't do it. One person would get a clap going and then some other people would try to join in. But the rhythm of each person's clapping was off. It sounded terrible. I looked around and tried to refrain from laughing. It was like our group was clapping retarded. It was so bad that invariably the clapping would die off a minute later because it was so cacophonous and distracting.

Usually when you have people from different cultures singing together, the dominant culture will determine the clap rhythm. In this case, there wasn't one because it was almost exactly 50/50.

As a Westerner, I believe clapping every other beat sounds way better than every beat. Every other beat clapping is slower and allows you to get a little dance movement/sway going between claps. When you clap on every beat, it feels like a militaristic chanting regimen.

NOT. Jesus doesn't care if it's on beat or every other. But Jesus does care about unity in love. He lived, died, and rose again to unite His people by His love.

There is no one clap rhythm but we are one body in one Spirit because of what Jesus accomplished for us. That means we willingly submit to each other and adopt one rhythm.

As a church leader, we choose a clap rhythm that best fits the people we lead. We may chose to honor weak or lesser parties by our clap rhythm. It's not simply about the dominant culture. In any case, regardless of the beat, we lead in love.

And the congregation chooses to love each other in unity by submitting to the rhythm of the leader. We can clap in unison.


UPDATE: I couldn't find Chinese Christians singing worship songs with clapping on Youtube but I found a Nepali one - I think the difference is due to use of the drums in Western music, specifically the snare drum so it's easy to pick up the off-beat)