7 Questions Jeremy should NOT ask Kobe 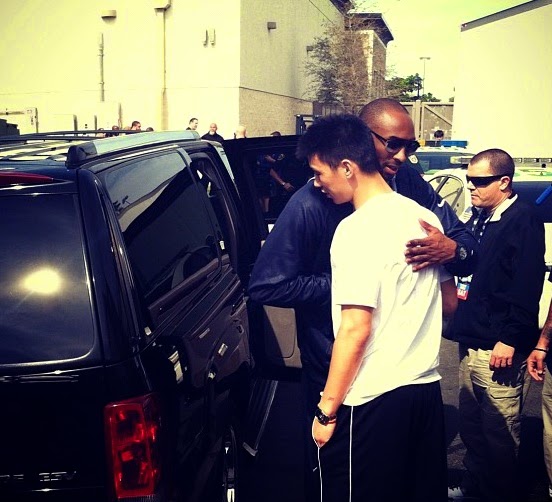 1) Can I crash on your couch tonight?

2) You know Taiwan and China are different countries right?

I'm Taiwanese American AND Chinese American. My parents are from Taiwan but originally from mainland China. It's actually two different countries. Taiwan is recognized by the United Nations as a nation but the People's Republic of China, that is, mainland China, sees Taiwan as a renegade province. Thus, Taiwan has a big chip on its shoulder when it comes to sovereignty and foreign affairs. The two countries have this strained relationship. But it's been better recently. It's all kinda complicated.

Kobe, why are you walking away?

3) When do you think Yellow Mamba will catch on?

5) Like I was wondering could we maybe work something out like for every 10th pass I give you, maybe you could send one back my way?

6) How about we do a pre-game handshake together?

Except instead of putting on glasses and pocket protectors, we can both pretend to sign a piece of paper and then tear it up. You know like how Vanessa did after she filed . . . . OK, you come up with something.

7) You remember that Colorado rape thing that you've put behind you?

I can totally relate.

OK, not the adultery thing cuz I'm not married. And not the one-night stand part because I don't do that. And no, not the sexual assault charges part either.

But see you met this girl who was crazy about you. She wants you and makes it known. I mean, she pretty much throws herself all over you. And you have this encounter, which you thought was mutually beneficial but later on, she completely turns on you. She goes insane and acts like you're her worst enemy. It's wild when someone is so high on you then later goes completely cold and stabs you in the back.

Yup, that was Houston for me.