The Prophetic Genius of Eddie Huang

February 10, 2015
Fresh off the Boat (the book not the show): A prophet in exile rants against injustice. 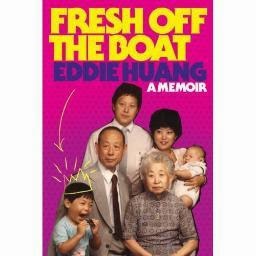 Because Eddie Huang is a prophet.

A prophet speaks truth without compromise. Isaiah was commanded to speak to a persistently unfeeling people.

A prophet is not afraid to call out the establishment on issues of social injustice. Amos proclaimed judgment on "those who trample the heads of the poor" .

A prophet employs symbolism to make his point. Ezekiel cut his beard off with a sword and set it on fire as a witness against Israel.

A prophet is offensive and persecuted for his views. John the Baptist got his head chopped off for calling Herod out on his illicit marriage with his brother's wife.

A prophet eats wack food as part of his testimony. Ezekiel ate barley cakes cooked over dried feces and John munched on locusts and honey.

Huang speaks both for and against those who are outsiders, the ones who don't fit in, the invisible, and the oppressed. He is an ambassador of exiles - a voice crying in the wilderness - who on one hand, rebukes authority for its systemic discrimination against exiles and on the other, rebukes exiles for their silent fear and pandering. He speaks the truth exiles don't have the courage to speak to themselves and speaks on behalf of exiles truth the establishment can't bear to hear. He is an intestine-eating, hip-hop quoting, Nike Jordan-rocking, bundle of angry contradictions whose life trajectory was forever changed by an 18th century Irishman's satirical essay on consumption of impoverished children as a means to end welfare. Clarity takes a back seat to impact. His lyrical verse and urban culture lingo go over people's heads but there's no mistaking the blade to the heart. Only a prophet stabs you in the front.

I started blogging because I couldn't find a voice that articulated the experience of being an Asian Christian male in America. My face says I don't belong to the US but my personality says I don't belong to China. I'm no rotten banana but I wanted to express an anger that came from feeling marginalized. That's exactly what Huang does in his memoir. It's not for the faint of the heart. He does not mince words and from one rage monster to another, I loved it. The fact he loves basketball doesn't hurt either. I still work on my Andre Miller old man game to this day.

Huang has a unique life path from my own. He is a second-generation Taiwanese American who grew up on the East Coast and moved to Orlando when he was eight years old. He grew up as the troubled oldest son of a restaurant owner. I'm also second-generation Chinese American but I spent most of my childhood in an area where highly educated Asians made up a critical mass, had parents with a much more stable marriage, and had a far more positive experience with Christianity. The model minority myth is zombified in Silicon Valley - we are the walking dead of stereotypes.

What I admire most is the gradual transformation of Huang's rage. It first finds expression through fighting and vengeance and I never had the courage to do that. My anger seethed beneath the surface and was sublimated in my pursuit of academic achievement. I'm straight Uncle Chan in that respect. He's got lots of youth rage stories and I admire how he didn't allow himself to get bent over a barrel.

But the vengeance and doing-stupid-things-while-drunk-and-high accounts get boring after awhile because disconnected, impulsive rage is meaningless. If I wanted humorous inebriation stories, I could read Tucker Max and Huang realizes the self-destructive nature of his temper in college. That's when things start getting interesting as his journey changes. He discovers his gift for words and he realizes his calling is as a prophet - to speak out on behalf of racial identity and against injustice.

There are six themes in Eddie's prophetic repertoire (there are more - I just picked the ones that stood out to me most): organized religion, racism between minorities, Asian American discrimination, racial identity, appropriating hip-hop culture, and finding a voice. I describe them below:

1) "I don't think people realize how fucking weird Christianity is if you're not raised around it" Despite his prophet title, Huang is no follower of Jesus and is repulsed by organized religion. His exposure to Christianity comes in the form of establishment control, inextricably tied with white supremacy. Ms. Truex's heavy-handed indoctrination program at First Academy ensures this for an eight-year old Huang. Believing in Jesus meant alienation from his culture, discrimination, conformity and, most of all, whiteness. This is another area where he resonates with the prophets - they also distanced themselves from organized religion. How could they rebuke it otherwise?

2) "I was still the buffer between him and the bottom" The worst discrimination can come from minorities not white people. The switch for Huang's rage gets flipped in elementary school when Edgar, a black kid, calls him a chink and throws him to the ground. Possibly the greatest tragedy for marginalized minorities is the basement in-fighting. The consolation of the low is beating up on the lowest. Sometimes a prophet must endure suffering at the hands of those with whom he has most in common.

3) "They'll never let someone with a face like you on television" Those words came from Huang's dad in response to his desire to be an ESPN sportscaster. Similar words are echoed when Huang interviews for a beat writer position at the Orlando Sentinel. Later on he writes this about being Asian American:

We can't fucking win. If I follow the rules and play the model minority, I'm a lapdog under a bamboo ceiling. If I like hip-hop because I see solidarity, I'm aping. But, if I throw it all away, shit on my parents, sell weeds, pills, and strike fear into unsuspecting white boys with stunt Glocks, now I'm authentic? Fuck you, America.

How can a prophet speak against injustice unless he experiences it first-hand?

4) "I was proud to be a Hunan Ren because my grandfather is one of the most honorable people I've ever known" I've never seen someone so thoroughly Americanized also simultaneously pay homage to their roots. Typically, assimilated Asian Americans are ignorant about their family history or resent their immigrant culture. But Huang is deeply knowledgeable and grateful for his family. His dad was a respected gangster in Taiwan. His grandfather gave up a promising political career as a protest against the corruption of Chiang Kai-Shek's regime.  There's a unique blessing to knowing your family history as the roots of his prophetic fire were seeded generations earlier and inform his path of protest today.

5) "People in Orlando never understood why two Asian kids were rocking Polo, Girbauds, and listening to hip-hop" Being an Asian minority parallels the black experience. I always felt it presumptuous to see being Asian as similar to being black. But for Huang growing up in Orlando in the 90s, it rings true. Huang's defiance gets him branded a troublemaker but instead of fighting the label, he goes with it - constantly stirring up trouble.  This is how he resonated with the black experience. A prophet learns from the prophets who have gone ahead of him.

6) "Those professors changed my life. I went from a punk kid that fought without a true understanding of the who, what, when, where, and why to a contrarian with a cause" A prophet is dedicated to texts. Huang was formed by Emerson, Locke, Ghostface, Lao Tzu, and Biggie. Never underestimate the power of words and food, fashion, hip-hop, and basketball make up the medium of Huang's voice. His break comes when he writes a letter to the Orlando Sentinel calling out the coded racism surrounding the 2004 Malice at the Palace. His prophetic voice is forming.

As the professor of exilic prophets warns:

You see, anybody in America who tells the truth about the barbarity of white supremacy and its legacy must be willing to die.

And like all the great martyrs who have heralded the message, Eddie Huang is laying his life down. So watch the show because it smokes - funny, insightful, and ground-breaking - but don't skip the book or you'll miss the fire.