My happiness is dependent on circumstances 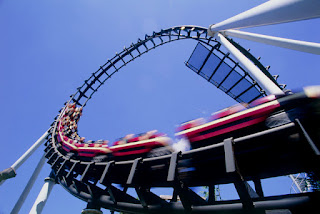 A friend emailed me that Weight Watchers stock, which I own, jumped 80% today because Oprah was announced as a board member. The news gave me a distinct feeling of pleasure. Like I just won something. Like I had just accomplished something worthwhile.
Up to that point I wasn't feeling so great because Mondays are typically tough for me. Like many preachers, I felt like my sermon the day before could have been better. It's the same as the Monday morning quarterback syndrome - I review game decisions that I wish I could do over again.

As a preacher of the gospel, I tell people their happiness is not dependent on circumstances but rather God's unconditional love expressed through Jesus Christ but most of the time my emotional life does not respond that way. I'm happy when things go my way and I'm unhappy when they don't.

I know I'm not alone in having my personal satisfaction depend on my surroundings but it's disturbing when it violates what I stand for as a believer and a minister.

As a man, my happiness is dependent on expressions of masculinity and physical health. I'm fairly healthy right now but have been having some joint problems and that's depressed my mood somewhat.

As a father, my happiness often depends on the behavior and accomplishments of my children. It's easy to go on an emotional roller coaster based on well our kids are listening to and obeying Judy and me. I also wonder for parents whose highest goal for the children is "to be happy" if they are consigning them to an idolatry of control - to pursue the utmost influence over circumstances so that no event would threaten their personal satisfaction. I fear I implicitly communicate that to my kids when I derive greatest pleasure over positive events and sadness over negative ones.

As a husband, my happiness often depends on the emotional well-being of my wife. As they say, "happy wife is a happy life". Truthfully, I'm probably most affected when she's unhappy with me but otherwise her moods don't affect me that much.

As a pastor, it is easy to spiritualize bad moods because they reflect my commitment to preaching the gospel well. But it is really just a thinly veiled excuse to place worth in my performance. Apart from my performance, my emotional well-being also feeds off others' perception of me. When I discover I may be disliked, things become very stressful.

I'm not saying that my life should be this constant, steady upward trajectory of contentment but there does seem to be some basic level of peace and joy that is missing.

What's exciting about these realizations isn't that I have so far to go. That's a humbling realization I always need. Rather, I have a tremendous opportunity to believe the gospel for myself.