Short Term 12: Why I became a pastor 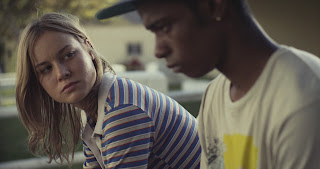 I watch movies to relax and be entertained but every now and then a movie comes along that grabs my attention and feels so compelling that I can't help but watch. Short Term 12 (now on Netflix) does that for me.

It is a breakout performance for Brie Larson and she is fantastic. She plays supervisor at a foster-care home for at-risk youth. She is incredibly competent but she carries painful baggage that become exposed after a new girl joins the center. That's pretty much it as far as story arc. There is drama and tension built up but in the end, it's about a woman changing lives while working out her own personal life change. That pretty much summarizes what being a pastor is about. I work on other people's issues as I wrestle with my own.

Here's why I loved the film:

The humor in the movie is provided by Nate, the new staff person at the group home. He tells the teens he is taking a year off from college because he always wanted to work with "underprivileged kids". His tone is patronizing and not so tactful. In another scene, he's told to be tough on the kids and initially refuse their demands as they will try to take advantage of him. A couple young girls ask Nate to jump rope with them and he dutifully turns them down. Classic.

It's easy to laugh at Nate as he commits all kind of rookie errors. Most of us would make the exact same mistakes if we were put in Nate's shoes. The laughter diffuses the tension from the tragic element of these kids' lives. It's hard to imagine a greater pain than being unloved by one's parents. The comic relief is indeed cathartic and reason why having a sense of humor is so important to survive and thrive in this kind of work. Nate is overwhelmed by the chaos and is an empathetic proxy for how we as outsiders would experience the group home.

The kids at the home are like a Benetton ad - there's every color under the sun. And yet there is no sense of tokenism in assembling this group of teenagers. Race is not directly addressed in any way nor does it feel like there's a "diversity" agenda. At the same time, I believe the writer/director, Destin Daniel Cretton, went to great lengths to cast people that reflect the true racial diversity of the Los Angeles area. It's so real that watching Short Term 12 makes you feel like you're watching a documentary. Cretton worked in a group home for two years and the stories in the movie reflect real-life experiences of foster kids he encountered during that time or through later interviews of staff and adults who went through group homes.

What makes the movie particularly poignant to me is Cretton wrote the movie for a very narrow audience. He wanted to send out a "thank you" to the people who work in group homes. It explains why he worked so hard to portray the group home experience accurately because he wanted to fully appreciate the demanding and emotionally draining nature of the work.

3) The beauty of shared pain

There are a couple indelible moments when two teenagers in separate scenes express their pain artistic ways. These moving emotional tapestries leave one speechless. After one of them, the staff member present says after a pause, "I don't know what to say to that, man". In moments like that, words don't do justice.

The original cut of the film was two hours long and apparently, "made you feel pretty depressed about humanity". Humanity is pretty depressing. There's a lot of pain out there. And yet there is something beautiful when a person has the courage to become vulnerable and express their pain through poetic means. Throughout the years, I've been privileged to participate in this kind of heart sharing from all kinds of people and there's nothing like it.

4) Life change is the hardest, most fulfilling endeavor

It's not a movie that hits you over the head with its message and I appreciate that. The plot turn is positive but it leaves many unanswered questions - for instance, you don't know whether Brie Larson's character is going to overcome her baggage but you do see her taking steps towards addressing them. That's how life works. We keep going, in the direction of the light, despite the darkness.

What I appreciate most is the way Cretton portrays life change. It is the hardest work. Life change is like squeezing water from a rock. Most people don't respond. Most people don't want to be helped. Most people don't see a need to change. Most people would rather suffer on their own than try to face problems that feel impossible to fix. Because of these factors, people in helping professions often make no discernible impact in others' lives. It's not that we're not trying, it's because the nature of life change is subjective, interactive, and complex - it's hard to know if we're helping, it's totally dependent on how the other person responds, and it's extremely challenging to overhaul a person's thought patterns.

And yet in those rare moments when you actually help another person, there is nothing like it. It is the greatest thrill to witness a person's transformation and to know you played a role in it.

Being a pastor means helping people to see their need for life change and point them towards truth. Being a pastor also involves being oriented towards that same truth and experiencing life change for myself. That's the message of Short Term 12. We help others as we grow ourselves and we grow ourselves as we help others. Success isn't judged solely by the tangible outcome of helping others out of darkness, it's determined by our willingness to journey with others towards the light.