Kevin Durant and the Brotherhood 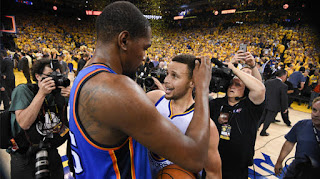 I've always imagined starting a company with friends. I can't think of a product we would make. I'm not sure it even matters. I just want to work with people that inspire me. I want to work with a team where we have similar values, close friendships, and are working to accomplish something big together.

When Kevin Durant, Stephen Curry and Andre Igoudala came together on the US national team in 2010, they were inseparable. Not only did they share a preternatural work ethic - they would get shots up in the evening after practice - they also shared a common devotion to their faith as the guys went to chapel together before every game. From what I understand, USA basketball and the NBA do not require chapel attendance. It's for guys who are both serious about their faith and not ashamed to be public about it. There's something significant about being devout believers on a professional sports team. I can't imagine the NBA being an easy place to live out your faith. There's constant travel, gobs of money, adoring fans, the sexual temptation that accompanies those aspects, 24/7 media exposure, and criticism on all fronts. Befriending a fellow believer who is not ashamed of his faith is vital. Curry's Christian beliefs are well-documented and so are Durant's. Iguodala's faith is less-documented because of his lower profile. But make no mistake - these guys love Jesus. During the 2014-2015 season, it appears ALL the Golden State Warriors were professed believers and attended chapel together. I'm not sure many NBA teams can make that claim.

The term "brotherhood" has formed a conversation thread in the aftermath of Durant's decision to join the Golden State Warriors. It's language that describes the relationship between Durant, Curry, and Igoudala. It indicates a bond that transcends a typical coworker relationship. Brotherhood means deep kinship and it goes far beyond what happens on the court. That's the premise of the epic TV mini-series Band of Brothers. It details the World War II exploits of Easy Company, 506th Regiment, 101st Airborne. War glues men together in a way nothing can match not even marriage. Veterans often report a stronger affinity with their fellow soldiers than with their wives. This is what Kevin Durant is after. And who would not want that? To fight for a worthy goal with like-minded companions. That's the way God designed us.

Being on pastoral staff of a church, I've been privileged to serve with a great team for a great cause for the past decade and that continues to this day. It's a trust I'm grateful for. It's interesting though because when I imagine starting a company with friends it's because we get to choose to do so. The value of the journey comes from freely choosing each other. And yet the men of Easy Company did not choose each other nor did they choose the war they fought. Their comrades and their mission was placed on them.

Perhaps then we value the freedom of choice too highly. I did not hand-pick my companions nor did I choose my cause rather God gave me my mission and teammates. And yet, when given the choice, like Kevin Durant, how many of us would forgo the opportunity to serve with elite, like-minded teammates in pursuit of a lofty goal?

I can't help but sense Durant, as he pondered his decision, thought about what the stories he would tell his grandchildren after his playing days were a distant memory. Perhaps his sentiment is best summed up by the closing moments of Band of Brothers in which a former member of Easy Company is interviewed in the present day and says:

I cherish the memories of a question my grandson asked the other day. When he said:
"Grandpa, were you a hero in the war?"
"No" I answered. "But I served in the company of heroes."