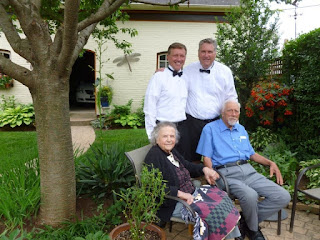 I've been loving Malcolm Gladwell's new podcast, Revisionist History. A recent episode is called Generous Orthodoxy; it tells the story of a 98-year old Mennonite pastor named Chester Wenger who loses his pastoral credentials for performing the wedding ceremony of his gay son. This podcast attempts to reconcile the tension between relationship (generosity) and moral principles (orthodoxy). Without a doubt, he falls on the generosity side of the question. His appeal to orthodoxy consists of personal sacrifice and respect for the institution.  There's a lot to disagree with:

1) Gladwell does not espouse conservative Christian beliefs: One of my friends couldn't finish the podcast because of Gladwell's "smarmy and superior tone". It's also immediately apparent, especially if you've listened to his previous podcasts, that Gladwell is politically progressive. In one of that three-part series, he attacks Stanford, Bowdoin, and other elite colleges for their insatiable endowment appetites. It should then come as no surprise that Gladwell is LGBTQ affirming.
And yet I've listened to plenty of smarmy and superior Christians. Their tone hasn't stopped me from hearing them out. I've also been known to have a smarmy and superior tone myself so how can I judge? If conservative Christians expect others to listen to us, shouldn't we be willing to listen first?

2) The Princeton protest segment is tangential: I revel in Gladwell's ability to weave disparate sources seamlessly into a compelling and cohesive narrative thread (a la Tim Keller). And yet his side story about Princeton students protesting Woodrow Wilson's name displayed all over the university campus was distracting and detracted from the gravity of Wenger's story. The protesters did indeed choose to go there and their sense of entitlement was repulsive.  It was only partially salvaged by Gladwell's suggestion that a generous orthodoxy must give up something costly - i.e. if the students truly believed in their cause, they should decline to return to Princeton and encourage potential applicants to avoid the school.

3) He only focuses on one side of the story: He says a generous orthodoxy is costly but every orthodoxy is costly when tested. I pay a price for holding the traditional Christian sexual ethic. It is unpopular, not trendy, condemned as regressive, and against "love wins".

And yet there are tremendous gospel redemptive elements in this podcast. It's hard to deny Gladwell's implicit understanding of the gospel albeit indirectly through his admiration of Wenger and this episode had me in tears. Ultimately, Wenger's example asks the question of how would you feel about same sex marriage if the person getting married is your son or daughter?

There's a couple things to get out of the way before wrestling with that question. First of all, is Chester Wenger aware of all the Bible passages explicitly forbidding and/or condemning sexual intercourse between two people of the same gender? Any mention of these passages in his letter is conspicuously absent. The most common ones are Romans 1:26-27, 1 Timothy 1:8-11, and Leviticus 18:22, 20:13. The fact Wenger does not mention them does not mean he is ignorant or uninformed. I actually appreciate he doesn't talk about them. After all, his letter states he and his wife have read and reread the scriptures. I'm sure Wegner has pored over those passages and not only those particular but ALL of scripture. He has wrestled over this issue regarding his son and his parishioners FOR DECADES. And thus paying attention to which scriptures Wenger chooses to mention in his letter is important.

So if I were to pick the verses that are most important, most compelling, most revealing of God's heart verses from chapter 1 of Romans, I would choose v.16-17 over v.26-27 any day of the week. And that's how Wenger opens his interview with Gladwell - he is not ashamed of the gospel because it is the power of God for salvation to everyone who believes. It's ultimately about faith. And if there's one thing I would proclaim to the world, it's v.16-17.

Of course, acknowledging sin and brokenness is crucial and Wenger's letter makes reference to the vast array of sexual brokenness in our world today. In that regard, I appreciate the letter's reference to eunuchs in Isaiah 56. These men were sexually dysfunctional in the most literal sense of the word. And yet there is room in the kingdom for the sexually dysfunctional. There's something so gospel redemptive about this. Another helpful example I would bring up is Jesus' love for tax collectors. Being a tax collector is an ongoing lifestyle that is inherently exploitative and disreputable. And it's not clear this group of people changed their despicable occupations yet they were loved in their present status.

Second, is Chester's son a follower of Jesus? If you believe being gay and being a Christian is mutually incompatible then you already have an answer. I'm not buying that. Chester is convinced beyond a shadow of a doubt his son is a follower of Jesus. And that's where personal experience comes in.

I'm limited in how I establish my beliefs. I value the here and now. I cannot staunchly believe something solely in the abstract and thus require some type of personal exposure or experience to fully reinforce my convictions. So when dealing with same sex marriage, I need gay friends to process these issues with. And fortuitously, over the past fifteen years, God has provided men - through high school, college, and ministry - who have come out to me as gay. Some of them are still close friends and followers of Jesus today. None of them have been "cured". I've walked with these men through various stages of their journey in coming to terms with their sexuality. Each one has a different story that does less to explain the origin of his sexual orientation and rather does more to highlight the sexual brokenness of all people including my own.

Therefore I don't have a special discipleship agenda for gay men. If we're all sexually broken then we're all equally in need of the gospel. My commitment is to help someone fully understand who he is as a new creation in Christ. This means viewing and managing our sexuality as a God-given expression of our desire for relationship, intimacy, and pleasure. Sexuality is about being known and loved. Unfortunately, our flesh is fractured, self-centered, and weak. In that regard, I'm with Christopher Yuan in that I cannot support "same-sex marriage as a faithful and godly choice when blessed by the church". I base my stance on my understanding of scripture, my theological convictions, AND my personal experience.

I discussed the podcast with a fellow believer and he responded without hesitation that if it was his son or daughter, he would have adopted a similar stance as Chester Wenger. I appreciate his honesty. I would absolutely love my child but I'm not sure how far I could go in affirming his lifestyle. I know for some that's tantamount to denying his personhood. I would like to think I could go as far as Wenger but without having gone through what he has, I don't know that I can. That's how I'm limited.

And yet I can say his example challenges me to re-evaluate my convictions, to assess how well I understand the gospel, and to ponder the depths of God's missionary heart. For all that, I am grateful. And though I do not agree with Wenger's decision, I have no judgment - only respect and admiration. I look forward to meeting him, his wife, and all his sons and daughters, in heaven.