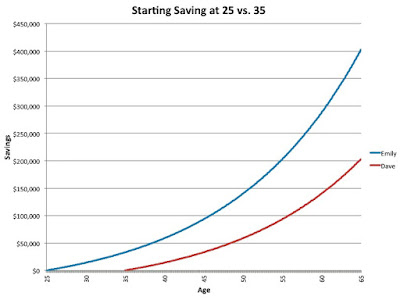 I recently taught my kids about the power of compounding. It’s a finance term that refers to the exponential growth of an investment. You invest a small sum of money which earns an annual return that is re-invested and over time, accumulates into a large sum. Compounding has a snowball effect. The chart above demonstrates how saving the exact amount but starting ten years earlier can make a huge difference. Emily contributes 33% more than Dave but ends up with twice as much wealth because of the additional time her money has spent compounding.


Finance bloggers extend the principle of compounding to other areas of life. One example is mountain biking. They write about how a skill can be broken down into various incremental steps or sub-skills. Working on one sub-skill at a time generates a compounding effect. I have been playing basketball for over thirty years. My body has deteriorated in the past decade but I’ve continued to work on my skill set. In my teens, I played as often as possible without focusing on anything and subsequently, did not improve. In my twenties, I learned how to dribble and finish lay-ups with my weak hand. In my early thirties, I learned to get my head up while dribbling which improved my court awareness and led to better passes. In the past decade, I’ve worked on my shooting and rebounding. Over the past twenty years, I have averaged about ten to fifteen minutes weekly on skill development. That’s a minuscule amount of time. And yet these incremental changes have compounded over the decades to make a big difference in my game.

The compounding effect also applies to relationships. Relationship habits compound over time and can have a massive effect. However, relationship habits tend to be subjective and are less binary than financial investments. Your account will instantly tell you well how you’re doing but it’s not as easy to measure quality of relationships. This means our relationship patterns can compound for good or for bad. And since each person is a mixed bag of habits, the compounding effect is often obscured because our wicked habits work against the righteous ones. And at any given time, the impact of our negative patterns can overshadow the good ones.

One example of relationship habit compounding is marriage. A successful marriage is the compounding of healthy relationship habits whereas a bad marriage is the compounding of unhealthy ones. This exponential effect cuts both ways. John Gottman writes about the habit of positive sentiment override (PSO). It means turning a negative conversation into a positive one by responding to your spouse with humor, encouragement, and/or re-direction. It involves de-escalating conflict and making a bid for emotional connection rather than choosing distance. This habit is nurtured by fondness and admiration for your spouse and I’ve witnessed in my own marriage, how PSO has reversed negative patterns in my relationship with Judy. Instead of responding with contempt, impatience, or irritability, I can make a joke, affirm her character, or change the subject. I remember how difficult this was in the beginning - as it had little discernible effect on the course of the conversation and it was emotionally taxing to adjust my attitude. And yet, over time, it has made our relationship so much sweeter.

A relationship habit exercised in one moment rarely has an immediate effect but it will certainly reap dividends in time and that’s the point. The success of relationship habit compounding should never be evaluated based on the short-term but rather over an extended period of time (meaning years even decades), as momentum builds and the incremental effect accumulates.

Here are two more examples of relationship habits that compound - one positive and one negative:

Confession: Confessing one’s sins, weakness, and failure to God, another person, or a group of people has a powerful compounding effect. The compounding of vulnerability works two ways: First, it’s a personal habit that compounds within a person. Confession reinforces itself the more often it’s practiced and encourages further transparency when it’s done with honesty, humility, gentleness, and wisdom. Confession is an act of humbling one’s self to disclose specific areas of weakness, failure, and/or rebellion. It is motivated by seeking help and as a path towards repentance - attitudinal and behavioral change. Second, the relational habit of vulnerability compounds within a people. A revival often starts with a group of believers confessing personal sin to each other. The habit creates a ripple effect that spreads and gains momentum, with an exponentially increasing number of people engaging in confession and repentance. I have experienced a handful of Christian retreats where during a sharing time with the entire group, a courageous person stood up and disclosed an area of previously hidden weakness, struggle, and/or failure. This creates a cascade effect where subsequent people stand up, share similar struggles, and breakthrough occurs. It’s an awesome thing to witness and I’ve seen this kind of viral response to confession also compound in daily life, outside of the retreat environment - albeit slower and often less visible.

Criticism: Criticism also compounds but often for evil. Criticism begets criticism. The practice of finding fault in another person generates momentum to continue its practice - on one’s self and others. Soon, one’s brain is tuned to find weakness and subconsciously goes there without prompting. What’s fascinating about toxic criticism is the more one gives it away, the less prepared one is able to receive it. Thus, the relational momentum of criticism will result in disconnection and avoidance. In that sense, negative relational habit compounding has a low ceiling. Once everyone is alienated from each other, the compounding effect ends. And yet criticism can continue to compound within a person. Neural pathways are solidified and reinforced towards critique of self and others. Guilt, shame, and condemnation can compound easily and quickly. My personality and upbringing have compounded my habit of criticism over the years. I have built up other relational patterns to block this negative compounding but every now and then, those bad habits rear their ugly head.

Personal finance is full of get rich quick propaganda. Likewise, the self-help industry promotes the instant life makeover. Just as there is nothing sexy about accumulating wealth over a long period of time, so too there is little glamour in gradual and durative life transformation. The longitudinal nature of relationship habit compounding demonstrates life transformation is more of a marathon than a sprint. It also highlights how difficult it is to catalyze habit formation. It’s not about a quick exercise of willpower or a one-time decision but rather the accumulation of repeated decisions. And the results are best measured across decades rather than hours, days, or even months.

The ultimate example of relationship habit compounding is the Great Commission. Jesus devoted 90% of his earthly ministry to his disciples. There was zero instantaneous impact. The disciples repeatedly fumbled around and misunderstood their teacher. At the time of Jesus’ crucifixion, his disciples had deserted him and there was little discernible transformation in their lives. After Pentecost, the disciples’ ministry exploded. Jesus’ teaching was supernaturally multiplied by the Holy Spirit as the gospel spread dramatically throughout the nation of Israel and beyond. Faith in Jesus continues to compound today. And a diseased church can be readily identified by its lack of faith compounding.

Relational habit compounding offers hope to those who start small, who take little steps, and who humbly and repeatedly choose good even when it goes unnoticed and has no discernible impact. Rather than over-weight the present moment, it causes us to place greater weight on the future, and beyond into eternity. I am grateful for how a confessional attitude has compounded in me over the past decades and sobered by how difficult it is to slow my spirit of criticism. I look forward to how the positive habits will continue to compound in my life’s second half.