The Two-Edged Sword of Asians and Education 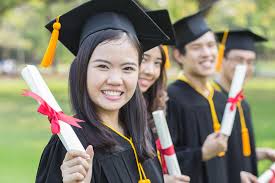 It was 6:30 AM on a Saturday morning. Five-year old Tommy looked up from his Chinese homework and protested:

Ai-Ling looked down and as she stroked Tommy’s hair affectionately, looked out the window at the sunrise and said:

"Tommy, studying is about learning. Learning is the greatest beauty. Some day you will attend an Ivy League school, take literature classes, and immerse yourself in the work of giants. Your mind will expand and grow as far as the horizon, like the radiance of the sun rising into the sky."

The preceding sentence has never been uttered in an Asian* household. And yet I’m certain the scene of early morning studying has been replayed often.

This the premise of Bryan Caplan’s book, The Case Against Education: Why the Education System is a Waste of Time and Money, that education is anywhere from 30-80% signaling. Signaling is communication. Education communicates to employers that you’re suitable for the employment. It is, in the language of a third grade classroom, like getting a gold sticker next to your name. Here’s the thesis of his book:

“In our society, education is a seal of approval. Employers know it. Workers know it. As seals proliferate, workers need extra seals to upstage the competition. You’ll never apply most of what you study, but so what? Academic success opens doors.”

As with many economists who live in the world of theory, Caplan constructs this straw man argument called the “human capital purist” where education is valuable as a good in itself. In the human capital purist model, one seeks education because learning is the outcome and education improves the lot of humanity.

No self-respecting, overachieving Asian believes that.

There’s no secret to what Caplan tells us. We all know education for what it is - a hoop to jump through, a badge of status, and a ticket to higher-paying work. My immigrant parents came to this country fully aware of the education meal ticket. My dad studied in Taiwan because his education was fully subsidized as a foreign student from Hong Kong. He knew free higher education was a no-brainer - not because he’d learn something but because it would help him get a better job.

It’s also no secret that many Asian groups are over-represented in US higher education. Students of Chinese, Indian, Japanese, and Korean heritage obtain an outsized proportion of bachelor’s and master’s degrees in this country.  Here’s the edge Asians have: Most Asian cultures are predisposed towards excelling in an educational system. A system is predictable, measurable, and has a defined outcome. In the education system, you study, you listen to instructions, you take a standardized test, and at the end, you get a diploma. It comes down to conformity. Communal cultures value conformity more than Western ones.

Asian culture, with its emphasis on conscientiousness and conformity is going to kill it in any system context. Amy Chua wrote about this phenomenon in her book, Triple Package, and got flack for it. She was construed as saying certain ethnic groups are superior. But that wasn’t the premise of her argument - it was that certain cultural characteristics such as a superiority complex, insecurity, and impulse control, led to outsized achievement. It certainly doesn’t mean Asians are more intelligent as IQ tests indicate Asians have about the same average IQ as white people.

This conformity aspect is huge. As Judy and I ponder the college prospects for our oldest son who graduates next year, we recognize his peer environment is radically different from our high school experience. In high schools, I took SAT prep courses, advanced classes, and applied for admission to prestigious universities because that’s what my peers did. I didn’t question it. It was how I fit in and I was competitive and self-motivated. My parents didn’t pressure me that much - mainly dad criticized my lack of discipline. I can tell you anecdotally I’ve observed the stereotype played out that Asian applicants to competitive universities all look the same on paper - piano or violin, high grades and test scores, a non-contact sport like tennis or swimming, bundles of AP and honors classes, and a smorgasbord of academic club involvement. My stereotype was reinforced by harder evidence when Wesleyan admissions officers observe a similar phenomenon in Jacques Sternberg’s 2002 The Gatekeepers (fantastic book on college admissions).

Conformity cuts both ways. There are certainly barriers of discrimination that make up the glass ceiling but there are cultural aspects that play a role as well. Just because Asians are successful at hacking the education system, doesn’t mean we're uniformly successful in all aspects of life. Conscientiousness and intelligence are highly valued at all levels of an organization but conformity, unfortunately, is not. Conformity is the exact thing you don’t want at the highest levels of the leadership - inventors, innovators, entrepreneurs, and executives. Conformity makes one a fantastic worker bee because you follow orders and don’t make trouble. But founders and executives don’t follow, they lead. They’re not afraid to stand out and be contrarian. This requires a certain immunity to the opinions of others, a killer instinct, and a willingness to think independently. The education system doesn’t naturally foster those qualities.

What does mean for my wife and me as we make decisions about our four kids’ educational paths? If our ultimate goal is to help our children secure a stable economic future, then we would be wise to keep them on the path of Asian educational overachievement. It’s not likely we will erase the financial implications of education but our goal is at least two-fold: to foster a love for Jesus and a love for learning. This would mean de-emphasizing the pursuit of education seals and exploring other means of achieving that end. It means community college is an option because the value of an education has declined. It means gap years and parachurch programs (i.e. Youth With a Mission's Discipleship Training School) are options as well. I’m not ready to consider Christian colleges yet.

And it is has one more aspect. On one hand, I want to deny some of my conformist leanings and surrender the appeal of the education badge. On the other hand, conformity and group-consciousness is not wrong in itself. Teamwork and sensitivity to others is good. And yet I also recognize the gospel will always be counter-cultural so there’s a discernment around when conformity becomes less valuable. After six years of our homeschooling experiment with our kids, we’re in a better position to exercise judgment. Sometimes it takes stepping off the education treadmill to recognize it for what it is - a status factory. And as Caplan emphasizes, anyone who’s been around the education system long enough sees the same.

* Some people might argue with this article that “Not all Asians value education” (Not all Asians are like that” - NAAALT). That is correct. I mainly mean Asians from India, mainland China, Hong Kong, Taiwan, Korea, and Japan and particularly those that have voluntarily emigrated in the past half-century or so.