Imagining Atheism as a Theology 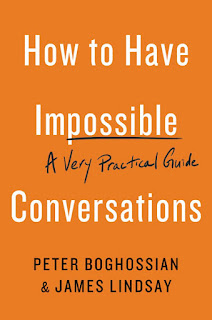 If atheism were a religion like Christianity, what would be its theological tenets?

My friend Eric suggested our poetry writing group and book club read How to Have Impossible Conversations by Peter Boghossian and James Lindsay as a way to have meaningful conversations in a polarized and divided culture. Since Eric is an atheist, our group likes to be upfront about the religious content of a book recommendation. To my surprise before I started reading, Eric sent an email apologizing for the evangelistic nature of the book.

His email piqued my interest and I finished the book in a couple days. Reading Impossible Conversations through the lens of atheist evangelism was fascinating. This book offers helpful insights to anyone committed to promoting dialogue. And yet as I made my way through Impossible Conversations, I realized it was intended to help atheists convert believers, primarily Christians, to non-believers. Boghossian already wrote A Manual for Creating Atheists, designed to do exactly that. I have read many books equipping believers to convert non-believers but never one that equipped non-believers to de-convert believers.

Both books aim to equip atheists with conversational principles in order for religious people to examine how their beliefs are formed and embrace reason. Eric’s email helped disarm my bias against the authors because I thought of them as evangelists; not of Christianity but rather atheism. I wondered what might happen if I took their evangelistic fervor to the extreme and imagined atheism as a theology.

First, I recognize theology is a blatant misnomer regarding atheism. Atheism is DEFINED BY a lack of belief in god or gods whereas theology is the study of god or gods. They are inherently incompatible. However, the purpose of this thought experiment is to describe atheism in theological categories because it may help Christians understand how atheism operates.

Second, because atheism’s only non-negotiable is a lack of belief in god, the other tenets of its theology are either implications of non-belief or values commonly held by atheists, more specifically, the authors, and my friend Eric as well. After all, as Eric pointed out, Christians are atheists about all other gods other than their own.

Third, my description of atheist theology is a caricature. This is a thought experiment. I’m deliberately painting with broad strokes to make a point about both atheism and Christianity.

Hamartialogy: How does atheism define sin? Boghossian uses the term “street epistemologist” to describe an atheist evangelist. Epistemology is the study of the nature of knowledge, justification, and rationality of belief. It is the study of HOW we know WHAT we know. To hold a belief arbitrarily and against evidence is evil.

"Ken Ham is the perfect example of someone who cannot be swayed by facts. He believes the Genesis flood narrative literally and incorrigibly. . . Ham has explicitly stated that there’s no evidence that would cause him to revise his beliefs” pg. 139

The cardinal sins of atheism are deception and dogmatism. Ken Ham, a believer in the earth’s creation in six 24-hour periods and founder of the Creation Museum and Ark encounter, has eaten from the tree of unknowledge and his eyes have been shut. Ham commits both sins because he believes the world was created in six 24-hour periods solely because the Bible says so and against scientific evidence.

First, to believe an unexamined religious idea is to fall into deception.
Second, to persistently ignore evidence to the contrary of one’s belief is dogmatic.

What is so devastating about these sins? They mean a religious person can cling to any belief without regard to consequences. Perhaps most damning is a religious person will take pride in and receive affirmation from within his religious community for his obstinance and certainty.

Soteriology: How is one saved in atheism? Another way to ask this: how do atheists save their souls? An atheist is saved by reason. Man shall not live by bread alone but by every fact that proceeds from reason. Reason reveals itself through the incarnation of evidence.

"The most difficult thing to accept for people who work hard at forming their beliefs on the basis of evidence is that not everyone forms their beliefs in that way.” pg. 139

In atheism, confession involves the disconfirmation of one’s religious beliefs. Chapter 5 pages 147-169 are devoted to disconfirmation. Creationist Ken Ham can only be saved if he confesses his sin. Generating doubt is the seed of atheist “faith”. Disconfirmation's altar call is the question “Under what conditions could this belief be false?” Repentance means dying to one's old way of life - letting go of a belief system formed without reason, facts, and evidence - in order to be baptized into new life - the dynamism of an examined life based on the scientific method. An atheist is sanctified by a consistent, rigorous, and thorough evaluation and reformation of his beliefs based on emerging evidence. An atheist is born again every time he thinks.

Eschatology: What is the final historical event in atheism? Atheism's eschaton, its pinnacle historical moment, is the disappearance of religious ideas and their toxic influence on our society and culture. Allowing society as a whole to be guided by ancient religious ideas is evil. Religion also promotes racism and totalitarianism. Thus, the atheist New Jerusalem descending from reason will have streets paved not with gold but with progress. The new earth is eternal enlightenment. Other implications of atheism include: evidence-based values, morality detached from belief in God, and a belief in the inevitable progress of humanity.

Biblical Theology: What are atheism’s sacred texts? There is certainly no Bible. Atheists take pride in the fact that their canon is constantly expanding. Histories of atheism choose the Greek and Roman philosophers Epicurus, Democritus, and Lucretius as the first atheist writers. Recently the writings of the Four Horsemen (aka New Atheists: Sam Harris, Daniel Dennett, Christopher Hitchens, and Richard Dawkins) have gained influence. Eric was quick to point out many ancient atheist documents were destroyed by Christians. Nothing grows a church like persecution and atheism is no exception. Credible scientific research would fall into this category as well.

Conclusion: According to this thought experiment, two values I share with atheists is the importance of examining one’s belief system and having an openness to uncertainty. The study of how we know what we know is crucial in our day and age. One cannot claim to be educated without pursuing intellectual rigor and honesty regarding his belief formation. On this point, many Christians fail. Many Christians are de-converted to atheism because they’ve never examined their Christian beliefs and refused (or been prevented) to let their faith engage with reasons, facts, and evidence. In many evangelical circles, expressing curiosity and asking questions is akin to unbelief and skepticism. This is tragic. Though the wisdom of God will always be foolishness to the world (1 Cor. 1:18-31), reason and evidence are not our enemies and cannot be an integral aspect of our hamartialogy. Paul’s admonition to the church in Corinth emphasized an unpopular and offensive gospel, not one defined by unreason. We, the church, must better equip Christians to wrestle with uncertainty, skepticism, and science.

Besides thinking about atheism from a Christian lens, another purpose of this post is to rebuke self-centered thinking within Christendom. Eric told me Christians would accuse atheism of ultimately being a worship of one’s self. I would not disagree. I see atheism as the elevation of humanistic ideals as a projection of one’s self. Understandably, Eric does not see atheism as self-worship. Rather, he countered, worship of self is exactly what Christianity and other religions are - the projection of humanistic ideals on a so-called divine being. Either way, the point is instructive and important: Any and every person is tempted to fashion god or not god in his own image. Therefore LORD I pray: Deliver us from the gods or not gods of our own making.