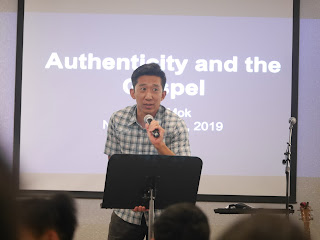 James Taylor, the great grandson of Hudson Taylor, the famed missionary to China who founded the China Inland Mission (now OMF) once said: “It is a tragedy so many foreign Chinese have left the evangelization of China up to the non-Chinese.”

James spoke those words over twenty-five years ago during a Chinese church retreat when I was a senior in high school. His calling out of the Chinese diaspora vis-a-vis white missionaries challenged and haunted me. This challenge was the impetus behind my plans to join Cru (formerly Campus Crusade for Christ) staff to do a one-year mission trip to China. But I didn’t go. Rather, I accepted an invitation from my hometown pastor, Tom Chow, to return to San Jose and reach my American-born Chinese peers.

Over the next five years, I found working with young American-born Chinese in an immigrant church context challenging but fruitful. It was a privilege to make disciples but I felt a growing dissatisfaction as I witnessed many of my peers leave the Chinese church for multiethnic, mainstream churches. I felt like I was constantly bumping against the limitations of an ethnic context. I decided to explore church planting and Judy and I were assessed by Stadia Church Planting in 2014. During the Skype interview, Judy unexpectedly shed tears when responding to a question about her most painful ministry experience. Not surprisingly, the assessor gave us a yellow light and recommended we see a marriage counselor.

We did and it was one of the best decisions of our lives. We uncovered areas of communication that were broken. She saw my current ministry as a competition against our family and our family was losing. She had no desire to lose me even more to a church plant. With the help of therapy, Judy learned to express her voice and I learned to be more patient and gentle in drawing it out.

Through mutual friends, I met Ryan Kwon, lead pastor of Resonate Church in Fremont. Ryan encouraged me to continue to pursue my calling to church planting and introduced me to Justin Buzzard; I joined Garden City Church as Associate Pastor in May 2016.

Garden City was a huge cultural shift from the ethnic church. I learned ministry in any context is challenging. Justin taught me valuable leadership skills such as casting vision, planning, and systems. I grew in confidence but still experienced bouts of insecurity. Last year, as Justin preached from Daniel about the courage of four young Jewish exiles who stood up to the empire, I realized how much of my missionary desire had been strangled by fear. I could no longer use Judy’s reluctance as an excuse. I was afraid of failure, hard work, and staring out at empty pews. I felt the Holy Spirit speaking to me: What if you were no longer afraid?

Last summer, Judy and I began praying in earnest. In the fall, Justin and the elders agreed to the following plan: Garden City Church will be sending me and my family to plant a new church in south San Jose. Our church will be financially autonomous, have its own name, and be a member of Acts 29 and the Garden City family of churches. We aim to start public services this coming fall.

Our church will be gospel-centered and conservative, yet open to questions and dialogue. Our church will be affirming towards certain Western and Eastern values. We’ll aim to take the best of cultures but also recognize it may result in taking the worst.

Someone reading this post may sense I am planting a church for Asian Americans. That is partly true. Growing up as an Asian American in the Bay Area during the 1980s often invited ridicule. That’s not true anymore. Today, Asian culture is hip and has global influence. BTS is the most popular boy band in the world. Awkwafina won a Golden Globe for Best Actress. The Facebook group, Subtle Asian Traits, has 1.6+ million members. Perhaps James Taylor should have issued a broader challenge. Perhaps it is the destiny of foreign Chinese to not only reach China but the rest of the world. Perhaps the Asian diaspora in the West is called to lead a global revival. Perhaps God wants to use an immigrant’s son to reach exiles and sojourners from all nations here in the Bay Area. I’m excited for the next chapter of this journey.