If Jesus epitomized tribal leadership, then so do you 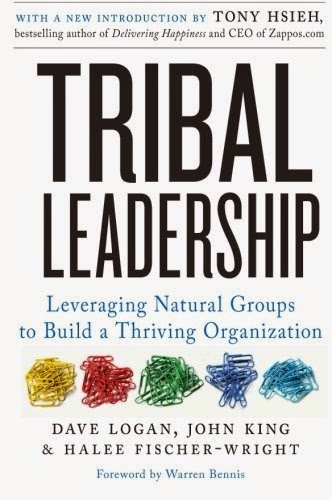 How God invented the triad

I hate leadership books. They remind me of everything I should be doing as a leader but not doing today. I feel guilty, insecure, and ashamed after reading them. So when a friend of mine recommended checking out Tribal Leadership, I balked.

But I finally got around to reading it and the book is awesome because it's completely about Jesus, though he's never mentioned by name.

Language matters: The premise of the book is that tribes are groups of about 20-150 people and each tribe has a culture that can be categorized in stages. The key insight to the three authors' research is each stage is defined by its culture and the culture is defined by language.

That's the key to making the book work - listen to how people talk about their company, their group, their church and you can determine what type of culture they participate in and what stage of leadership they're at.

Stage One: Life sucks  ==> "Everything that can go wrong will go wrong. This world is hopeless"
Stage Two: My life sucks  ==> "So and so has it all together but I just can't seem to catch a break"
Stage Three: I'm great (and you're not) ==> "If only I was surrounded by competent people, they could fully appreciate my brilliance"
Stage Four: We're great ==> "We have a great team and we trust each other"
Stage Five: The sky is the limit ==> When employees of Amgen, the pharmaceutical company were asked who their competitors are, they responded "Cancer" or "Untimely death" not "Pfizer" or "Genentech"

Jesus' words: You can argue about Jesus' legacy - the Christian church, his disciples, etc. But it's more difficult to challenge his words. At the very least, he left us his language.

How then did Jesus speak about his tribe of disciples?

Truly, truly, I say to you, whoever believes in me will also do the works that I do; and greater works than these will he do, because I am going to the Father. John 14:12

He dealt with a group of mediocre, uneducated men. At so many points he could have disparaged his disciples (and at some points, he did). They repeatedly misunderstood his plans and intentions. They deserted him.  And yet he continued to believe in them.

Triads: The most distinctive aspect of Stage Four and Five tribes is their usage of triads. Rather than individuals depending on a celebrity leader, each tribe member has his/her network of expanding relationships.

Logan, King, and Fischer-Wright give the example of Darla Longo, a real estate executive, who holds an annual party whose purpose is to allow her (and others) to play matchmaker. She introduces clients to brokers, senior brokers to successful rookies, and clients to one another. In each conversation, she talks about each person's strengths and passions -intentionally creating business relationships between two people based on shared values.

Triads function based on trust. A celebrity leader accumulates followers because he alone is trustworthy. But triads expand because each member trusts the other to whom he is being introduced. This is also generates stability because no single tribe member is responsible for holding the tribe together. It is truly a team effort.

The trinity is by definition triadic. Jesus builds triads with us because he trusts us. Jesus is the bridge-builder, the liaison with us between God the Father, between us and the Holy Spirit.

If you had known me, you would have known my Father also. From now on you do know him and have seen him. John 14:7

And I will ask the Father, and he will give you another Helper, to be with you forever, even the Spirit of truth, whom the world cannot receive, because it neither sees him nor knows him. You know him, for he dwells with you and will be in you. John 14:16-17

Jesus introduces his disciples (and all believers) to the Father and the Holy Spirit. He is the mediator of both relationships. He talks up each party -  we are righteous because of his finished work on the cross , the Holy Spirit is awesome, and God the Father doesn't need a lot of introduction.

Our role as disciples is triadic. We love each other because Jesus loved us first. And Jesus loved us first because God the Father loved him first. Our role as disciple-makers is also triadic. We introduce people to Jesus, who introduces them to the Father. The people who meet Jesus, in turn, introduce him to others. That's how the network expands. Every relationship we begin has it's basis in a prior relationship. Everything God does in us, He wants us to do in others. If it sounds like multi-level marketing or of certain cult religions, good. Those organizations are merely copying what Jesus invented.

Reflection: In the past, when friends asked me how my tribe was going, I would be quick to blame the failings and weaknesses of fellow tribe members. They were the ones holding me back. They were the ones keeping me down. They didn't have the same gifts I did. And they didn't share the same values. I felt bitter, resentful, and insecure. I wanted people to be dependent on me and yet I couldn't figure out why the people I discipled didn't feel confident enough to disciple others. Finally, I was sorely disappointed when people failed my unrealistic expectations.

I've been stuck at Stage Three for a long time. I've spent a large part of that time wondering if that will ever change.

The good news is it already has.

It's the one of the first promises Jesus made to his disciples in the farewell discourse (John 14:12). The good news is that it's not about me, it's about his church - his tribes of disciples. The good news is that I am surrounded by effective and competent leaders. Truth be told, the disciples didn't hit Stage Five until Jesus left the earth. The church took off once given the Holy Spirit. Jesus guaranteed the church would have every full capacity to live out Jesus' tribal leadership.

That is his greatest gift to us.

If we believe his words and obey his teaching, we have every capacity, as he did, to be Stage Five leaders. That is the identity of the church - a supernatural Stage Five tribe of tribes on mission to rescue humanity. We may not act that way, we may splinter into Stage One chaos, fall into Stage Two malaise, or compete in the wild, wild west of Stage Three but the reality is that we have been changed from death to life, equipped with His Spirit, and sent on mission to triad the world to Jesus.

Buying into that reality is what the journey of faith is about. I don't rely on external evidence of my personal change, rather I trust the Savior of the world who promised that anyone who believed in him would do even greater works then he did. There is no fear of failure because the success of my tribe does not depend on me. There is no pride or insecurity because each of us is adequate, trusted, and worthy in Christ. We depend on the supernatural reality of the Spirit working in every one of his tribal members. The ultimate tribal leader is the one whose leadership impact is greatest after he leaves.