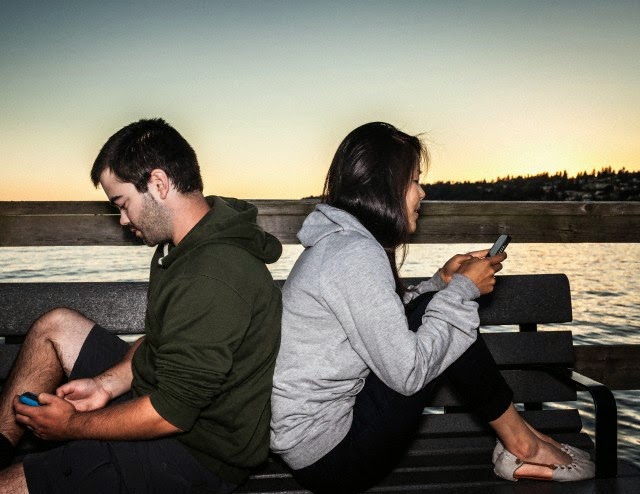 Exodus 33:11a Thus the LORD used to speak to Moses face to face, as a man speaks to his friend.

A couple months ago, news came out that the owner of Angry Little Asian Girl (Lela Lee - a fellow Cal classmate but I didn't know her) had brought a lawsuit against Angry Asian Man (Phil Yu) for trademark infringement. She asked him, months earlier, if he could change his blog name to something different - presumably without "Angry" in the name. Their brands have been around for years but Lee didn't bring it up until recently because because Yu wasn't a professional - making a full-time occupation out of his blog. The whole thing escalated and you can read more details here.

Lee and Yu knew each other casually through various events - they had met in person in the past. However, at no point in their dispute did either party attempt to have a face to face meeting (based on what I read on Yu's blog in February - the posts have subsequently been removed). Lee emailed Yu. Yu didn't reply for months. Lee got mad and served him with a lawsuit (via email I believe). Yu retaliated by writing about her on his blog. Things got uglier from there with a Twitter war, etc.

For two people so respected in the Asian American community, taking a couple hours to sit down together and discuss this in-person would have been so valuable.

I sense more and more confrontations like this occurring in the future because young Asian Americans have a decreasing ability to have face to face communication (and I totally get the irony of writing this post but written communication does have its role).

The pattern of interaction in this dispute is so Asian - and I mean that in the most negative sense. I see conflict avoidance, passive aggression, bitterness built up over years exploding, feigned humility, and of course, minimal/non-existent face to face communication. We're already disadvantaged because of our upbringing - most Asian families avoid conflict, lack of eye contact in face to face interaction with parents especially fathers, and little/no training in empathy. Add to that toxic mix our increasing dependence on devices as an intermediary for interpersonal communication and you have a killer recipe for social impairment.

During my IBM/Hitachi days, my Asian (American-born!) coworkers would instant message me while sitting a dozen feet away. It would drive me crazy but there were times I would do the same thing. We think it's more efficient this way - it's just a quick question and it saves time. It also feels less intrusive. The truth is, I would often resort to text and email when I didn't have the emotional energy to have a face to face conversation, when I was afraid of rejection, or when I wanted to state an unpopular opinion but didn't have the courage to voice it in person.

That's why texting, email, and instant messaging can be lazy and cowardly forms of communication. I totally get why Asians like it though. We want the opportunity to take our time coming up with the right words. We don't want to feel pressured to instantly respond. We don't want to deal directly with rejection or an unexpected response. The intermediary provides a buffer. But face to face interaction matters because there's so much more communicated when you meet someone in person. I remember in college when my dad told me I had become a man after I apologized to him. It was a conversation in the car that I will cherish for the rest of my life. The intensity of looking another person in the eye and acknowledging them as a human being is the essence of what relationship is about.  In face to face communication, the words only convey a fraction of the sender's intent. Most of it is body language and tone. The other two powerful elements of face to face communication is touch and context. Touch: If I'm able to resolve a dispute, I can give the person a hug. I can hold their hand or touch their shoulder when we pray. Context: If we're eating, we can comment on the food. If the weather is nice, we share that in common.

So if you can't stomach the idea of having a face to face conversation with someone you have a dispute with, you need to pause before communicating through any other medium (email, text, instant messaging, etc) because you have anger, bitterness, and resentment that needs to be dealt with first. Take your time to calm down and meet with the person. But expressing anything through an intermediary - human, digital, or otherwise  - seriously risks your intentions being misinterpreted.  I can't remember ever successfully resolving a dispute over email. Email flame wars always escalate because it's so easy to misconstrue people's intentions for the worst and the other party has no opportunity to defend himself/herself in the moment.

I am not naive enough to think if Lee and Yu had simply had a face to face conversation, the Angry Asian dispute could have been prevented. There seem to be years of resentment on Lee's side motivating her lawsuit. But it saddens me they could not have gotten together, looked each other in the eye over a Philz iced mojito, and really sensed each others' hearts. At the very least, they could have agreed to keep the dispute private and not fight in front of the kids. They have both brought a lot of good to the Asian American community and it would have been a great blessing to have that work continue unblemished.

Finally, I love this professor's suggestion of doing a face to face day - no devices for the entire day. Painfully good.