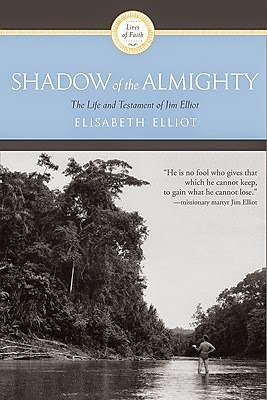 Recently a friend asked me to list my favorite books on manhood. He asked from a place of need because it's lonely being a guy. We're not good at expressing our feelings. It's hard for us to ask for help. We have trouble forging deep friendships because we fear intimacy. We haven't been taught how our violent passion is a gift from God. And we have few role models to patterns ourselves after. Every man has other men who lead him into manhood and although they will never replace iron-sharpening relationships with other men, there are my favorite guides in the journey so far (in order of when I read them, oldest first).

1) Shadow of the Almighty by Elisabeth Elliot

Before this book, I didn't understand anything about manhood except that it related to strength, courage, and risk-taking. After I read this biography about Jim Elliot during college, I began to imagine the limitless possibilities of faith, courage, and vulnerability. Here was this guy who risked his life for Jesus as a missionary in Central America and yet was incredibly raw and honest about his own walk with God, his fears, failures, and desires. It was an intimate portrait of what was possible for someone following God. It wasn't about manhood per se but it was so powerful. It is one of the defining books of my Christian life and an all-time favorite. This book inspired me to keep a journal - a practice I follow to this day. A great way to learn about manhood is to study the lives of great men. I have read other biographies but this one stands above everything else - perhaps because of the strategic moment in which I read it.

2) Wild at Heart by John Eldredge

Certainly the criticisms of the book are valid - it's stuffed with movie illustrations, unabashedly white middle-class male, and his use of scripture is suspect - but the book simply rocks. Up to that point, my issue was feeling pressure as a man, feeling like biblical manhood consisted endless commitments, responsibilities, and toil  But when I read Eldredge, I felt fully alive and inspired to kick ass for God. I felt like something deep inside me was awakened - and that same spirit of adventure is latent in every man, yearning to be released.

3) Bringing up Boys by James Dobson

I bought and read this book after our second son was born and it was a tremendous blessing. I'm no James Dobson fan and I don't appreciate his conservative political activism. But in the end, it's an insightful guide on how boys are different from girls, how God made the differences good, and how we can appreciate and nurture those differences in boys. He treats topics with nuance, tenderness, and the unconditional love of God - it's just a fantastic manual for helping parents of boys. It helped me appreciate certain things my dad unintentionally did to invest in my brother and me and certain things that I want to do with my boys.

4) Silence of Adam by Larry Crabb

I love Larry Crabb. His stuff is so good. I don't know why this book isn't more popular. It's about the passivity of men and how men tend towards either neediness or toughness - and what each behavior indicates about our heart condition. He also talks about the words every man (and women) need to from another man: I believe in you. You're not alone. You can do it. A retreat speaker used the same phrasing in his talks one time and now I know where it came from.

5) The Game by Neil Strauss

I talk about this book a lot because it's the quintessential manhood story. It boils masculinity down to chasing girls and it's arguably the most popular male self-improvement book in the world. Like Shadow of the Almighty, it is basically a memoir. I see it is as kind of exploration of what it means to be a man - are we defined by women or how other men see us? I appreciate Strauss' story because it is a coming of age narrative for any man. A man is utterly incompetent in an area and through mentors, hard work, and training becomes a champion. But is being a champion womanizer what he really wanted?

This is the most practical book on my list. The nice guy syndrome doesn't describe every guy but is spot-on for pretty much every Asian guy I've met. This book is the secular antidote to the problem of the Passive Asian Male. It describes the outward behavior of a new creation male. If you place radical trust in Jesus, then the picture of manhood Glover paints is possible and natural for you. The manifestation will require a painful inward journey of self-discovery but as you walk in the Spirit applying this book, the sky is the limit. He will teach you how to prioritize your needs, set limits, and express your feelings. It's basically Boundaries (Cloud and Townsend) for men. His stuff on covert agendas is amazing.

This book was not written for men at all but a guy like McManus represents .000001% of the population and this book about faith risk-taking is the essence of what manhood is. Only McManus can take a few verses about Jonathan and his armor bearer taking on Philistine post and write an entire book about it. It's like Wild at Heart without the male-focus and better exegesis.

Robert Bly is not a Christian but he is a poet (all Christian are poets but not all poets are Christians). He writes beautifully about manhood and mythology. The book is woven around a mythic wild man who rescues the king's son from his parents, in particular, the queen. It's an extended metaphor for the male initiation ritual and it is incredibly intense. His stuff on father-woundedness and separation from the mother is controversial and thought-provoking. The book was pivotal in helping me understand the social importance of the fraternity and men's organization.

9) Fresh Off the Boat by Eddie Huang

It's not about manhood, it's not Christian at all, and it's really an extended rant on various topics but it's such a great meditation on a man's journey through anger. Anger is the defining emotion of manhood. Tim Keller says anger is love in motion to deal with a threat to someone or something we truly care about. Huang's struggle to understand his anger and make it productive is what makes his story compelling. I also really wanted to include an Asian male in this list.

If I had to pick one book to give to my son, it would probably be Shadow of the Almighty. It's hard to go wrong with a martyr.