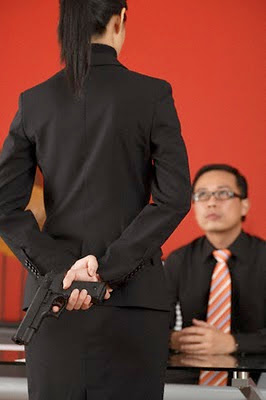 Pictured is a tactic I have imagined using in certain church meetings I've had in the past. Anyone who ministers to people has meetings and Chinese church meetings have their own unique set of frustrations. Of course these vary by church but here are some suggestions to help navigate what could potentially be hazardous minefield for 2nd generation Asian-Americans and non-Asians. The context is meetings between ABC ministers and lay people (like myself) and OBC ministers and lay people.

1) Determine the de facto leadership structure. Titles are not as important as seniority and status. Someone with no official position may pull the strings.
2) Find out attendees' position in advance and explain your position. This is not always possible due to time and relationship considerations but it makes a huge difference in what kind of expectation you set for the meeting. Much (if not all) of the decision-making happens outside the meeting because often dissenting opinions are voiced off-line between the de facto power players.
3) Assume silence is disagreement. In American culture, we think no news is good news. So if people are silent to a proposal, we may conclude it means agreement. Not in Asian culture. When people greet your comment or feedback with silence, assume there is an issue.
4) Observe carefully how people react each other. You can determine the de facto leadership structure by watching how people's faces express themselves when someone is talking.
5) Listen carefully to detect the underlying issue. Because Asians tend to communicate indirectly and avoid conflict, learn to talk less and listen more. When listening, pay special attention and read between the lines to discern what the true issue is. For example, if a mom says she doesn't want her child to attend the church sleepover, it may be because her child is often cranky and difficult to deal with the next day than because she objects to your youth ministry philosophy.
6) Identify the poison pill people and have a plan to address their concerns: There are always leaders who either extremely conservative or critical or both. When they voice their objections, your proposal will get sick and die. Find out who they are, acknowledge their fears, and discuss ways to assuage their fears.
7) Learn to make small talk and be genuinely interested in others: This is a general relationship principle but is possibly more crucial in a Chinese church where rapport-building really helps Asians feel safe enough to tell how they really feel about something. The quality of relationship affects the level of transparency.
8) Be vulnerable about your weaknesses and struggles: I hear ministers complain about being under-appreciated by their OBC leaders. We can give others an opportunity to minister to us if we freely share the challenges we are going through
9) State your position and/or concerns clearly and directly: If you would like people to communicate with you in a direct and clear manner, then you must model it for others.
10) Give grace to yourself and others: At various times, I have been incredibly frustrated with other people's faithlessness, lack of vision, and ignorance. I sprinkle Jesus' blood over them. I recognize and accept that these may people may never change and choose to accept them as Jesus accepts me. And at various times, I have lost my temper or made flippant or insensitive comments that I later regretted. I pour Jesus' blood over my guilty conscience for those moments.