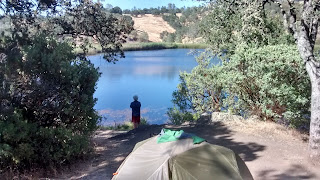 I write a lot about marriage because I think it's important. But I often neglect the greater subset of which marriage is contained, that of friendship. I am fortunate to have married my best friend but she cannot be my only friend nor does she even remotely understand significant aspects of who I am (and the same is true of me to her). In Jack Donovan's words, I need a squad that will hold down the perimeter with me. I need a group of brothers who can walk with me and I them as we roll through the bumps of life.

I've never been good at being friends. It's difficult for me to keep in touch with others. I'm a here and now person and when I don't see a buddy regularly, it's easy for me to either forget about him or be unwilling to expend the effort to hang out. Even worse, when I do see people regularly, I tend to get bored of them. Judy was concerned when we first got married that I would get bored of her (after seventeen years of marriage, we now we seem to bore each other equally). I was never like my brother - the kind of person who could spend 24/7 with another friend.

Given the above, I have realized the value of abiding friendships. I also realize I have been tremendously blessed to have some seriously awesome guys in my life. They initiate with me. They reciprocate when I initiate. They accept who I am. They listen to me. They get in my face. They call me out on my stuff. They're not afraid to laugh at me and help me not take myself too seriously. They enjoy talking about ideas and challenge me to think. They listen to my struggles and share theirs with me.

I just got back from a backpacking trip with a buddy and it was a blast. We suffered through steep trails, blazing sun, and poison oak everywhere. While wading in the pond of a dried-out waterfall, I felt something sucking on my toe and let out a yelp of fright. It was likely a young trout that was so starved it mistook my toe for a bug. My buddy absolutely cracked up. I hated his guts for laughing at me but it was pretty funny. We talked about life, philosophy, marriage, and leaving a legacy. It was so good and so life-giving.

It takes work to maintain a friendship. I have neither the energy nor desire to nurture many friendships. As I've gotten older, it's increasingly difficult to arrange logistics to meet up with friend groups. Most of my significant conversations occur in a 1on1 context. It's not that they can't happen in a group; it's just that group dynamic is not easy to cultivate and if it's already hard for two people to get together and connect.

As I enter my 40s, I have a renewed appreciation for friendship. I know a lot of middle-aged fathers who are lonely and have few friends. I absolutely get lonely. I often feel no one understands me. I get disconnected from my wife and wander in the desert, thirsty for affirmation and attention. Not only so but I have strong impulses to fight, compete, and argue in ways that my wife is simply not wired for. And I've seen, time and time again, men get beat down, discouraged, lonely, depressed, aimless, just going through the motions because life didn't turn out the way they imagined it and they feel like they are alone trudging the sand.

There was a time when male friendship came easily and naturally. Being single, in school, and involved in extracurriculars such as sports makes it easy. Having fun neighbors and a younger brother close in age makes it easy.  Friends move apart for school and jobs. Getting married makes it harder. As people start to have kids, it gets even more challenging. Interests diverge. Time is scarce. Life is tiring.

There are many reasons men have trouble making and keeping friends as they get older but it all seems to boils down to one thing: pride. Men are fiercely independent. We only see doctors and therapists if the women in our lives force us to. We loathe being perceived as needy. We believe seeking help is a form of castration. We don't like to initiate with others because it makes us appear needy. We hate being told what to do. We resent having to ask for directions. We want a strong sense of control and autonomy. We value the freedom to do what we want and not to have to rely on anyone.

It's really hard to ask another dude to hang out. It can feel desperate and weak. It's so much easier just to have it happen organically or spontaneously or whatever it is that makes it looks like we've expended the least possible effort.

It's ironic that, based on my observations, men feel like it's okay to be needy around a woman but not ok to be needy around other men. It really works much better the other way around. We've been conditioned to be vulnerable with our mothers, likely because they've nurtured and cared for us when we were weakest - sick, depressed, etc. On the other hand, our fathers modeled for us how to be stoic, unyielding, aloof, and tough. That stuff needs to be turned around. Vulnerability should characterize all of friendship but particularly the community of men. We can only hold the line if we are brutally honest about our weaknesses. Others cannot strengthen what is neither shared nor acknowledged.


In a real sense, I need the companionship of other men more than I need my wife. I had male friends before I got married and they made a huge impact on my life. Guy friends are what led me to Jesus and what helped me grow in my faith. I am nothing without the influence of male mentors and friends. And I need my brothers now more than ever - there are fewer instructions and guidance for the later years in life and I value the wisdom and insight that only older men can offer. It's not that I don't value my wife - she is irreplaceable - but my wife is one person and my male friends are a community. I need a community more than I need any one person. The apostle Paul acknowledges this when he says it is not good for men and women to be married - we don't need marriage but we do the body of Christ. Marriage re-enacts the gospel through an exclusive covenant, child-bearing, and sex but friendship is the ultimate thing. It is the sina qua non of marriage. It is the thing that marriage is ultimately after - the connection, belonging, and nurture of a community. It takes a village to raise a man.