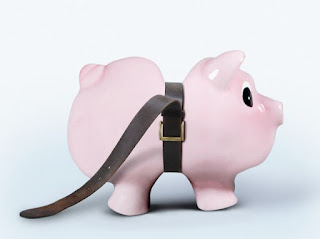 A couple years ago, our couples group at church went through the book Free by Mark Scandrette. The subtitle of the book is "how to spend your money and time on what matters most". Time and money are both private matters but money is often a much more sensitive and personal topic than time. It wasn't easy for our group to share openly and consistently do the exercises the book recommended. I also sense it was difficult because most of us were fairly entrenched in how we view money. It almost felt like it was too late to change.

Our college/young adult group is now going through the same book and I'm hoping to adopt a different approach this time, by cultivating an atmosphere of vulnerability. That's why I'm sharing my story. Because I'm convinced of this -

Our values are revealed by how we spend our money. And many of those values, conscious or not, are formed by our childhood.

So here are two dominant images that have shaped how I view money today. They are typical narratives for an American-born child of immigrants.

One frequent adolescent memory was the sight of my father's back on Sunday afternoons. He would sit in front of his IBM PC and clack-clack away with only his index fingers on the keyboard, methodically recording the past week's spending. His family finance journal started with Excel and later graduated to Quicken. He would print budget spreadsheets and expense reports from his dot-matrix printer and place them on the dinner table before we ate to show us how meticulous his tracking had been. He wrote in a little spiral notebook the date, mileage, total price, and gallons purchased every time he got gas. He would boast about how much money he had saved because of his frugal spending. Periodically, my dad would sit us in front of the computer and show us the method to his madness - how to enter an expense, how to categorize it, how to create budget categories, how to calculate a buffer, etc.

This was better than what he used to do - tell my brother and me stories of how materially impoverished his childhood was. These stories always arrived in the context of some behavior or attitude he wanted to change in us. After our eyes repeatedly threatened to roll out of our sockets, he stopped with the poverty narratives. But not until we graduated from college did he stop boasting about his ability to conserve cash.

I asked my dad recently about his view of money, especially before he became a Christian twenty years ago. He told me he he loves to save money and he used to derive tremendous emotional satisfaction from counting every penny. He observed that he and my mom, like most immigrants, had a profound insecurity. It stemmed from growing up poor. And it meant that no matter how much money they accumulated, it was never enough. As the next generation, I inherited part of their financial insecurity but due to my materially secure childhood, I now manifest insecurity in other areas. I'm only partly driven by ambitions of material success.

I was obsessed with LEGOs for most of my childhood. The set I wanted most was the mid-1980's LEGO space station set (6971 to be exact). I think it retailed for around $50, which was quite expensive back then. Every time we went to Toys R Us, I would grab the box and flip it around lovingly, gazing at the pictures, and envisioning all the play possibilities. I asked my dad repeatedly for two years to buy it for me. He eventually did but he made it so painful. He would ask me things like -

What's the point of this set?

Why can't you have a smaller one?

Why would you spend this much money on a toy?

How does this benefit your future.

What kind of investment return can you get on this?

How can we afford this thing?

Money doesn't grow on trees. (OK not a question)

He would pepper me with these questions, shake his head in disdain, and then walk away.

During the 1980s, my mom and dad, who worked for Apple and IBM respectively, upgraded our family home twice. Many IBM employees lived in upper middle-class Almaden Valley because of the excellent schools and proximity to the company site. We moved there in 1983 from a nearby, middle-class neighborhood. Our Eldridge Dr. house was less than a block away from the junior high I attended and a couple blocks from a local pool. I have fond memories of riding my bike with my brother to swim practice on summer mornings and on one particular day my mom crashing our 1978 Volvo 240DL station wagon (the original "Mokmobile") through the side of the garage and bringing down the front of house.

In Silicon Valley terms, this was the top of hill. We had a spacious home in an affluent neighborhood within spitting distance of great schools. But it wasn't enough for my parents.

In 1987, we moved again, staying in Almaden Valley but purchasing a newly built custom home near the top of the Almaden hills less than two miles from the Eldridge house. The semi-rural area known as New Almaden was just starting to get built out into new subdivisions. Our backyard bordered Quicksilver County Park. Since then, my parents' house, like many homes in the area, has almost quadrupled in value.

Our second move baffled me. We didn't need a new home. We lived in a great location. My brother and I had friends nearby. Our family was only the four of us and I don't recall my brother and I ever asking for more space. Now we were in this large house, farther away from everything, and my parents worked longer hours than ever to pay the bigger mortgage.

In my recent money conversation, my parents told me, in retrospect, their motivation for buying the New Almaden home came down to one thing: upward mobility. They wanted status. And nothing speaks status like a big house in the hills. It was also an investment decision - after all, Chinese people love real estate.

In the end, what confused me most was my parents were willing to spend hundreds of thousands of dollars on a new home we didn't need but acted like we couldn't afford a $50 LEGO set I felt I couldn't live without. It seemed like such a strange and irrational way to value objects. Nowadays, I go through a rigorous mental checklist on whether to buy small items while being tempted to make large purchases on impulse - out of lust or envy.

How childhood images shaped my view of money

My upbringing, coupled with later a Christian value system (my family began to follow Jesus when I was 14), birthed a conflicted relationship with money.

On the one hand, the enduring image of immigrant insecurity has blessed us. My wife and I are both exceedingly frugal and this is one of two main factors in how we've been able to raise four kids on a pastor's income in ultra-expensive Silicon Valley. The other factor is the generosity of both my and Judy's parents in helping us purchase our home. It's a similar story for many of my friends. Few of my peers could afford to live here if it weren't for our parents' financial assistance in buying a house.

And yet on the other hand, the images of insecurity and upward mobility have also been a curse. I have an unshakable feeling that no matter how much money I have, I should be saving more. When I first started working at IBM, I maxed out my 401(k) retirement plan contributions and stock purchase plan. I did it because my parents told me to. Even now, much of my interest in finance and investing revolves around greed and competitive desire (outperforming the market). I also have this nagging sense that I should be upgrading homes every five to ten years. And as our kids grow, that our house and lifestyle should be expanding proportionally.

Although I appreciate the lessons my parents taught me about my money as a child, I have a deeper appreciation for how their view of money has been transformed by kingdom values. I would love to replicate their journey but my wife and I have our own path to figure out and that means replacing old and dark images with new and brighter ones. And the first step in our adventure is examining how our view of money today has been shaped by pictures from the past.