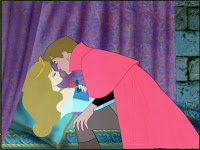 Some of you may have forgotten this fairy tale. King Stefan and Queen Leah (the queen's name is never mentioned - I found it on Wikipedia) wrestle with years of infertility and finally, through in vitro fertilization, they give birth to a beautiful daughter, Aurora. At her christening, three fairies give her a blessing. But before the third fairy, Merriweather, can bless her, Malificent the evil fairy crashes the party. She is royally pissed off that she was not invited and therefore, curses Aurora that on her sixteenth birthday she will prick her finger on the spindle of a spinning wheel and die. Merriweather, the last fairy to give her blessing, does not have the power to reverse Malificent's spell. But she does modify the curse - if Aurora's finger is pricked, it will not end in death but a deep slumber that can be awakened by true love's kiss. In one version of the Disney book, the narrator writes that Merriweather gave King Stefan the gift of hope. In John 11:4, Jesus says Lazarus' sickness would not end in death. A couple verses later, he says Lazarus is asleep and that he is going to wake him up. No, he doesn't kiss Lazarus - not even close but the effect is the same. Jesus is the prince who breaks the curse. He is the one who turns death into sleep and wakes us into life.

And I didn't remember this from the movie but once Aurora fell under the curse of eternal sleep, the fairies also cast a spell on the every person in the castle. In a real sense, the curse on Aurora was also a curse on the entire kingdom. And when she is awakened by the prince, the rest of the kingdom is awakened as well. There's some gospel in there. One of the women in our church used to design girls' Christian t-shirts and we have one that reads: "Rescued by the Prince". Amen to that.