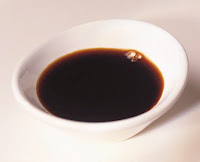 While waiting for the next game of pick-up basketball at the community center, three high school students (all white males) were discussing how one of them had a job at an Asian supermarket. They asked him if anyone spoke English at the store and stuff like that. I'm sitting maybe two feet away.

Then one of the guys, who is now a graduating senior and I've played with since a freshman, turned to me and asked -

"Don't take this the wrong way, but can I you a question?"

I love it when people say that. I looked at him, nodded (smile on my face), and braced myself (no smile inside).

"Do Chinese people eat rice with soy sauce? Because I love to pour soy sauce over my rice." The other guys murmured their agreement on how awesome of a delicacy soy sauce and rice is.

I looked at him and thought 1) I really like this kid 2) that is the most adorable and earnest question I have heard in a long time. I told him:

"No. Chinese people don't do that. Soy sauce is a dipping sauce or a seasoning for a dish but you don't pour it over plain rice and then eat it. That's a white people thing. Personally, I think its disgusting." (I was trying to think of the best metaphor and of course, it occurs to me afterwards - its like putting ketchup on a hot dog bun and eating that. Ketchup is for the meat.)

From there, we had a fun discussion about what exactly Chinese people do with soy sauce, what is authentic Chinese food (not Panda Express), why when people speak Chinese it sounds like they're yelling at each other (its just how it is - Italians sound like that too). I love it when people have the courage to ask those kinds of questions. I think many of us Asians make it tough for non-Asians to ask these kinds of questions at risk of offending us - which is always a possibility. But its neat when someone is just really earnest like that.